On Sunday, BJP president JP Nadda reached Dehradun and reviewed the party's ongoing preparations for the Uttarakhand Assembly election due early next year. 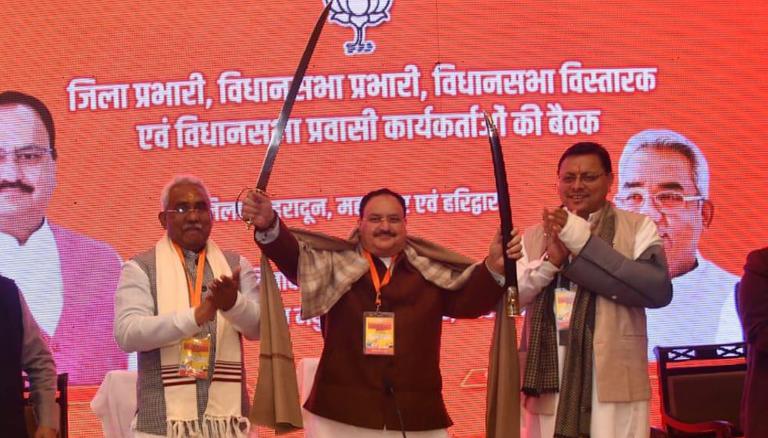 
On Sunday, BJP president JP Nadda reached Dehradun and reviewed the party's preparations for the Uttarakhand Assembly election due early next year. Speaking to the media later, Uttarakhand BJP chief Madan Kaushik stated that they discussed the execution of 28 points in every Assembly constituency. According to him, Nadda stressed that booth-level success was imperative for the saffron party to retain power in the state.

Uttarakhand BJP chief Madan Kaushik remarked, "We had a long meeting with the Vistarak, Pravasi Karyakarta, in-charge and 4-5 main party workers of every Assembly constituency. BJP president (JP Nadda) gave the victory mantra to everyone. He listened to them and gave them a solution."

"All party workers have to do 28 things in the Assembly segments. We also discussed how we can improve the sentiment. The mantra is 'Win booth, win election'", he added.

In the 2017 Uttarakhand Assembly election, the Harish Rawat-led Congress government lost power after BJP won 57 seats in the 70-member House. Thereafter, Trivendra Singh Rawat served as the Chief Minister of the state until 9 March, when he resigned because of a "collection decision" taken by the BJP top brass. His successor and Lok Sabha MP Tirath Singh Rawat's tenure as the CM was also short-lived and was replaced by Pushkar Singh Dhami as the Election Commission was unlikely to conduct a by-election owing to the COVID-19 situation.

AAP has tried to make inroads in the state in the last few months with a mass outreach campaign titled 'Uttarakhand me bhi Kejriwal', increasing online presence besides regular visits by high-profile leaders such as Manish Sisodia. However, non-BJP and non-Congress parties have failed to make any gains in Uttarakhand so far which is evident from the failure of Uttarakhand Kranti Dal, SP and BSP. While AAP has declared Colonel (retd.) Ajay Kothiyal as its CM face, Congress is yet to confirm whether the Uttarakhand polls will be fought under Harish Rawat's leadership.

On December 25, Dhami quashed the possibility of senior BJP MLA and Labour Minister Harak Singh Rawat quitting the party by sharing a picture of a dinner meeting with him. Briefing the media, Rawat said, "Dhami has assured me that a medical college will be set up in the district at the cost of Rs.25 crore. In the presence of (Cabinet ministers) Dhan Singh and Madan Kaushik, Dhami assured that a hospital will be established here on priority. Pushkar Dhami is (like) my younger brother and our relation dates back many years. I am no longer upset with him".