‘2.0’ Most Googled Film In India This Year; Here’s What’s Common About The Movies That Made It To Top 10

Akshay Kumar and Rajinikanth’s ‘2.0’ was the top trending movie this year on Google. There’s one common factor about the movies that made it to the top 10.

When two of the biggest superstars of the country, Akshay Kumar and Rajinikanth, and the tag of ‘India’s most expensive film’ come together, it’s obvious that the buzz over ‘2.0’ will be huge. While the popularity of the Shankar directorial is well-known, Google has corroborated it as the movie was top-most trending on the search engine this year in India.

Meet 3.0 in 2.0! The perfect movie outing for your children this weekend, #2Point0 in cinemas now!

Tiger Shroff'’s action flick ‘Baaghi 2’ was the second on the list. Both of Salman Khan’s movies, ‘Race 3’ and ‘Tiger Zinda Hai’ made it to the list at no 3 and no 5 respectively, proving the superstar’s popularity.

Three of the highest-grossing movies in Hollywood this year, ‘Avengers: Infinity War’, ‘Black Panther’ and ‘Deadpool 2’ were placed at no 4, no 8 and no 10 respectively and their box office collections in India were a testimony to their popularity.

Similarly, two of the highest-grossing Bollywood movies of the year, ‘Sanju’ and ‘Padmaavat’, both Rs 300-crore grossers were at positions 6 and 7. Ishaan Khatter-Janhvi Kapoor starrer ‘Dhadak’ also made it to the list at no 9. 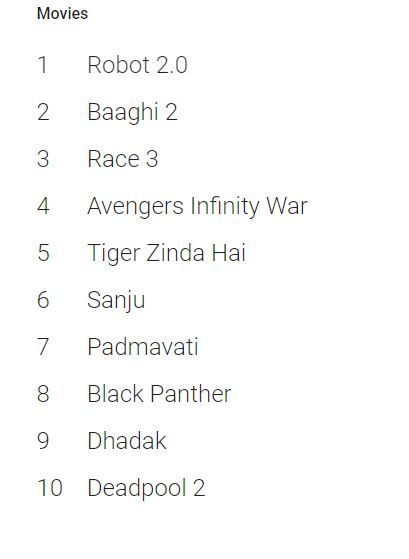 One interesting point to note is that except for ‘Race 3’, which failed to live up to expectations, all the others in the list are outright successes. ‘Race 3’ was termed a ‘failure’ because of the massive expectations from a Salman Khan film and the heavy criticism, but even the action flick had earned close to Rs 170 crore in India.

It just proves that there is a correlation between the buzz on Google and a movie’s success at the box office and vice versa.