Abhishek Bachchan took to his Twitter account on Wednesday to celebrate 15 years of 'Guru', which also starred Aishwarya Rai in the lead role 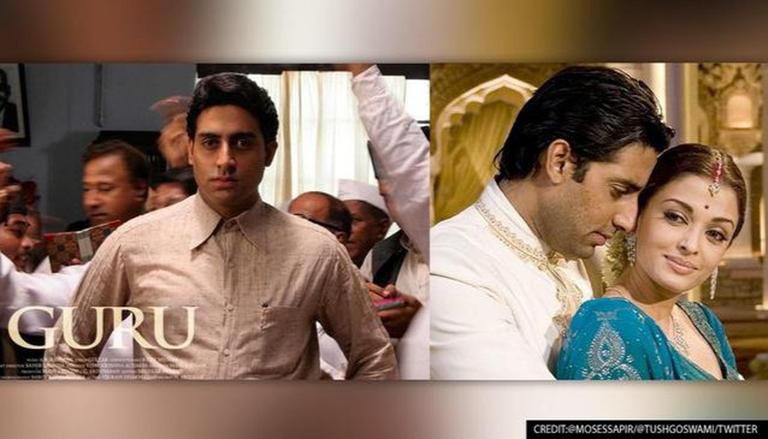 
Abhishek Bachchan took to his Twitter account on Wednesday to celebrate 15 years of film Guru, which also starred his wife Aishwarya Rai in the lead role. Helmed by Mani Ratnam, the film won several awards and accolades and became an important one in the actors' filmography. Abhishek Bachchan took to his Twitter account as the film clocked 15 years and remembered an iconic dialogue from the 2007 release.

The film was all about a man with a big dream, who left a small village with his wife to establish his own business. The actor remembered the memorable moment as he shared a clip of one of his most iconic dialogues from the film. The dialogue goes, "Jab Log tumhare khilaf bolne lage, samajh lo tarakki kar rahe ho." He captioned the video, "15 years! Time flies."

Fans took to the comments section and hailed the actor's work in the film. A netizen mentioned that the film will be one to be cherished even 150 years down the line. A fan also mentioned that the film set the benchmark in the industry, while others praised his performance in the film. Fans can now watch Guru on the online streaming giant Netflix.

Movie, Dialogue & Performance Which Will Be Cherrished 150 Yrs Dow The Line Too. "Guru Bhai Se Ladna To Guru Bhai Banke "🙌

Best best ever movie #Guru 😍 this movie is the benchmark ..which shows how talented you are AB ! 😍

What a performance.. what a movie.. will always be fresh in the memory .. AB.. congratulations 🤗🤗

The actor was last seen in Bob Biswas, which was released in December 2021 on Zee5. The actor took on the role of a contract killer, who has suffered memory loss and how he gets back into the business. The trailer saw the lead actor go on a murder spree, and also saw glimpses of his on-screen wife Chitrangada Singh and children. Abhishek Bachchan also took on a role in The Big Bull, which was based on the famous Harshad Mehta scam.

Apart from the actor, the film also saw Ileana D'Cruz and Ram Kapoor take on pivotal roles. The film is available for viewers on Disney+Hotstar. The actor is currently gearing up for the release of his upcoming project titled Dasvi alongside Yami Gautam and Nimrat Kaur. The film will be helmed by Tushar Jalota and is touted to be a social comedy.