Actor Aparshakti Khurana and his wife Aakriti Ahuja, on late Thursday night, confirmed that the couple is expecting their first child with a monochrome pic. 
Bollywood actor Aparshakti Khurana, on late Thursday night, took to his verified Instagram handle and shared a picture to make a big announcement. Interestingly, with a monochrome picture, featuring him and his wife Aakriti Ahuja, the actor announced that they are expecting their first child. In the picture, Aakriti can be seen flashing a smile while Aparskahti kisses her baby bump.

Writing a brief caption for the announcement post in Hindi, the Stree actor wrote, "Lockdown me kaam to expand ho nahi paya, humne socha family hi expand kar lete hain (We could not expand our work during the lockdown so we decided to expand our family instead)". He also hashtagged "pregger alert". Meanwhile, sharing the same picture, Ahuja wrote, "Doing our bit to add to this Baby Boomer generation".

Within a couple of hours, the post bagged an overwhelming response as it received over 60k double-taps and is still counting. Meanwhile, a section of fans flooded the comments section with red-heart emoticons and congratulatory messages. Interestingly, a handful of his contemporaries and peers from the industry also extended virtual wishes. Actor Ekta Kaul commented, "Aree Wahh.. congratulations" while Scam 1992 actor Shreya Dhanwanthary, Darshan Kumaar, Neena Gupta, Sanya Malhotra and Priyaank Sharmaa, among many others, wrote, "congratulations". 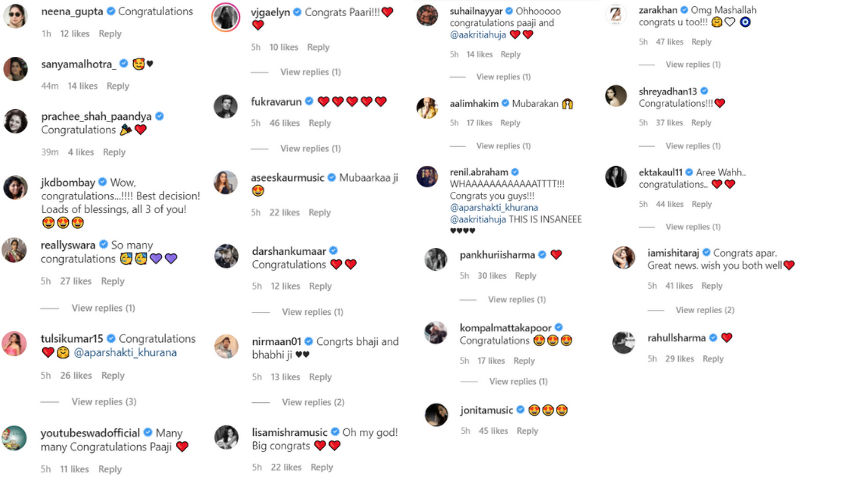 Apart from giving a peek into his life to 1.1M followers, the Luka Chuppi actor is keeping fans posted with his whereabouts and upcoming projects. A day before announcing his wife's first pregnancy, Khurana had shared the teaser of his upcoming music track Aaya Jado Da, also starring Parul Gulati. The teaser focused on the plot of the music video, which seemed to be set in a village of Rajasthan. It gave a glimpse of the love story of Aparshakti and Parul's characters. However, at the end of the teaser, Aparshakti's character gets kidnapped. The song Aaya Jado Da, sung by Asees Kaur, will be Aparshakti's second music video on YouTube.

On the professional front, the 33-year-old actor was last seen in Varun Dhawan's Street Dancer 3D, in which he played a brief role. The actor has multiple upcoming releases in his kitty, including Helmet. Khurana will be seen romancing Pranutan Bahl in the upcoming comedy-drama.