Ajay Devgn recently took to his Instagram handle and dropped a behind-the-scenes picture from the sets of 'Runway 34' featuring himself and Amitabh Bachchan. 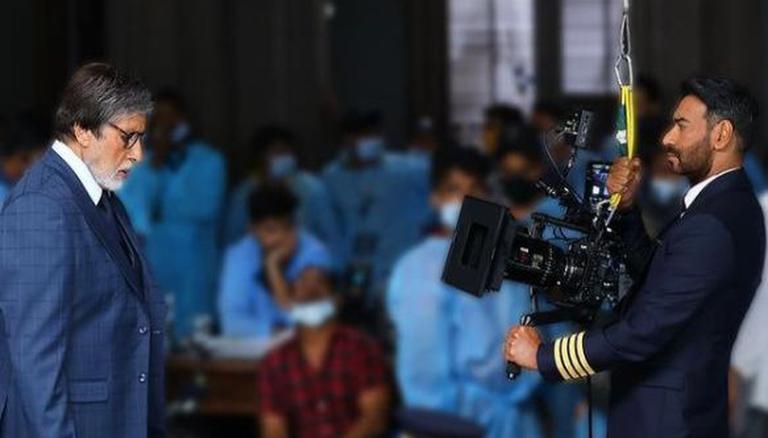 
Bollywood actor Ajay Devgn recently took to his verified Instagram handle and dropped a behind-the-scenes picture from the sets of Runway 34 featuring himself and Amitabh Bachchan. In the picture, he can be seen wielding the camera instead of performing in front of it. The actor has seemingly turned director and can be seen capturing the iconic actor Amitabh Bachchan.

Devgn, who is also directing and producing the project, revealed that the initial title change of the film was Mayday.

Taking to the photo-sharing site, Ajay Devgn posted a picture where he can be seen donning the uniform of a pilot as Amitabh Bachchan is wearing a suit. As for the caption, Devgn wrote, "My kind of selfie... #Runway34."

Earlier, Devgn had announced that the forthcoming drama thriller has got a new title, Runway 34. He also unveiled the first look posters featuring the leading trio, including Rakul Preet Singh. He hailed the film as a "high-octane thriller", which has been inspired by true events.

On Instagram, the Singham star uploaded three character posters for each cast member. Ajay can be seen clad in a pilot's uniform with reflectors, while his poster tagline reads, "Flying with his eyes shut". Amitabh Bachchan's poster is all things intense and reads," Facing the turbulence", while Rakul Preet's poster showcases her stationed in an aircraft, looking perplexed. "Brace for impact", her character poster echoes.

Runway 34 was officially announced in November 2020 and went on floors in December 2020 in Hyderabad. The film will be theatrically released on April 29, 2022. Apart from the aforementioned actors, it also stars Angira Dhar, Boman Irani, Aakanksha Singh among others. The film also marks Ajay and Big B's collaboration after 7 years since Satyagraha's release in 2013. They have previously acted together in Major Sahab, Khakee, and Hindustan Ki Kasam.

Meanwhile, for the unversed, Devgn is currently gearing up for the release of his first-time collaboration with filmmaker SS Rajamouli in RRR. The actor will also star in Maidaan, Raid 2, and is reportedly filming for Drishyam 2. He also has Indra Kumar's directorial Thank God alongside Sidharth Malhotra in the pipeline.