Taking to Instagram, Ajay Devgn shared a video to mark the two year anniversary of his historical drama film 'Tanhaji: The Unsung Warrior'. 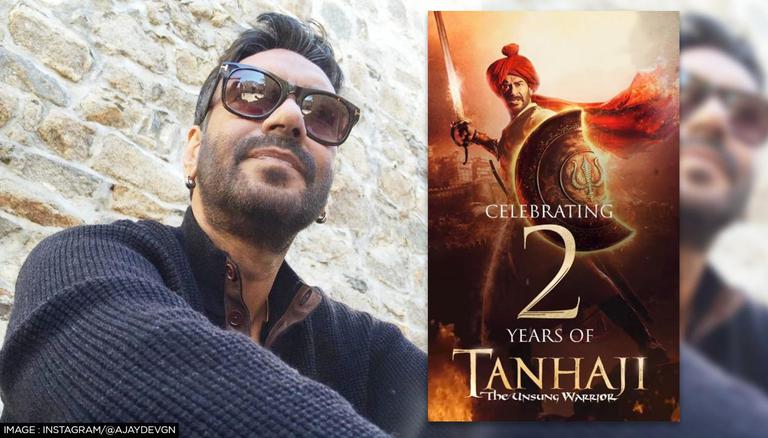 
Ajay Devgn is celebrating two years of his historical drama film Tanhaji: The Unsung Warrior, which saw the actor take on the role of the Maratha warrior Tanhaji Malusare. Directed by Om Raut, the film revolved around the warrior's attempts to recapture the Kondhana fortress after it gets under the control of Mughal emperor Aurangzeb. High on Vfx, packed with stunning performances, the film received positive reviews from audiences and critics alike.

On its anniversary, Ajay shared a special video via social media, which begins with Tanhaji sitting with a red flag, and then pans to several fight sequences that would transport fans back to the film. The movie also starred Kajol as Savitribai Malusare (Ajay's on-screen wife) as well as Saif Ali Khan as Udaybhaan, who locked horns with Ajay's character.

Taking to his Instagram handle on Monday, January 10, the Singham star shared the video clip and wrote, "From script to screen to making history. Celebrating #2YearsOfTanhaji." Take a look.

Director Om Raut also shared a video montage of the ensemble cast's character posters and called himself 'extremely lucky' to have had the opportunity of showcasing Tanhajirao Malusare's life on screen. He wrote, "I consider myself extremely lucky to have had a chance to showcase the life of this great Mawala of Chhatrapati Shivaji Raje, Subedar Tanhajirao Malusare on the silver screen. Can’t believe it’s 2 years already!!! Thank you Ajay sir, for making my dream come to reality; Much love, respect, and gratitude. @ajaydevgn sir, @kajol ma'am, #SaifAliKhan sir, #BhushanKumar Ji and #TeamTanhaji. Taking away lots of amazing memories for a lifetime."

The actor is awaiting the release of SS Rajamouli's magnum opus RRR, in which he stars alongside Alia Bhatt, Ram Charan and Jr NTR. He will also be seen in the official remake of the 2019 Tamil film Kaithi, as well as the web series Rudra: The Edge of Darkness, which marks his debut in the digital space. The actor is also directing, producing and starring in Runway 34 alongside Amitabh Bachchan, Rakul Preet Singh, Boman Irani among others.

READ | Aparshakti Khurana to Ajay Devgn, actors that will venture into OTT space in 2022
READ | Is Ajay Devgn shifting dates for 'Kaithi'? Here's all you need to know

WE RECOMMEND
Is Ajay Devgn shifting dates for 'Kaithi'? Here's all you need to know
Aparshakti Khurana to Ajay Devgn, actors that will venture into OTT space in 2022
'Singham 3' touted to be in Ajay Devgn's 2022 lineup alongside 5 back-to-back releases
Ajay Devgn asks to 'spot the difference' with collage involving son Yug; netizens reply
New Year: Ajay Devgn dives into 2022 with son; Amitabh Bachchan hopes peaceful beginning
Listen to the latest songs, only on JioSaavn.com