Akshay is currently riding high on the success of his latest release "Mission Mangal" which has crossed Rs 100 crore mark at the box office. The outlet reported that Akshay pulls in "at least USD 5 million and up to USD 10 million per film". He gets million through his endorsement of over 20 brands, including Tata and Harpic.

All earnings of the actors were calculated between the period of June 1, 2018, and June 1, 2019. After Akshay, legendary actor Jackie Chan is placed at fifth with USD 58 million haul, followed by Cooper and Adam Sandler at sixth with USD 57 million each.

Evans, who appeared alongside Cooper, Downey Jr and Hemsworth in summer blockbuster "Avengers: Endgame", secured eighth place in the list.

Paul Rudd and Smith were placed at the ninth and tenth positions, respectively. 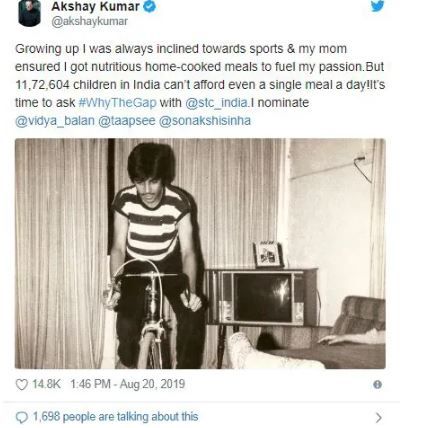