Akshay Kumar Reacts To His Own Memes In Netflix's Hilarious Video; Watch

Netflix India shared a hilarious video of Akshay Kumar, where the actor can be seen reacting to his own memes, while also recreating a few of them. 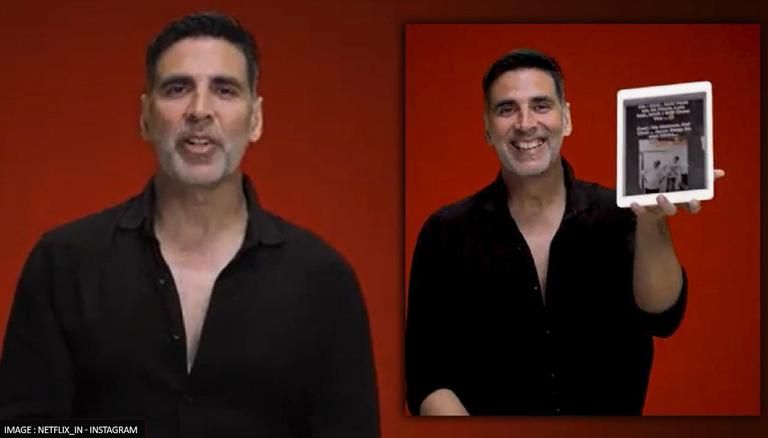 
Despite being busy with his back to back releases, Akshay Kumar recently engaged with his fans through a hilarious clip where he reacted to his own memes as well as recreated some of them. In a video uploaded by Netflix India, Akshay reacted to various social media comments, posts and tweets pertaining to him/ scenes from his most popular films like Phir Hera Pheri, Welcome and even the recently released Sooryavanshi.

The actor was at his witty best as he played along with the audience's online banter, leaving everyone in splits. The video also comes shortly after the streaming giant premiered his latest cop-drama Sooryavanshi almost four weeks after its theatrical release.

Akshay Kumar reacts to his own memes

Taking to their Instagram handle recently, Netflix unveiled the minute and a half long clip and wrote,"The Khiladi of Bollywood aka @akshaykumar reacts to his own memes and even remakes some of them 🙈 #Sooryavanshi now streaming on Netflix." The string of memes began with a post where someone recreated his iconic side pose as Raju from the 2000 blockbuster film Phir Hera Pheri. The actor quickly burst into laughter, noting that "This post keeps appearing on my feed and many memes have been made out of this scene." He then enacted another famous dialogue from the film, "25 din main paisa double".

He further shared another still from one of his movies and hilariously updated the meme by making the same expressions as his character. Another meme was from Welcome, where Akshay's "Miracle Miracle" dialogue had given rise to a new series of jokes. "I knew this was about to come. It's been 14 years since the movie was released but this post is still very popular", he further added. He concluded by urging people to watch Sooryavanshi on Netflix.

The superstar is gearing up for the release of Atrangi Re, which also stars Sara Ali Khan and Dhanush in pivotal roles. Directed by Aanand L Rai, the film will be released on December 24 via the OTT platform Disney+ Hotstar. He will also be seen in Ram Setu, Prithviraj, Bachchan Pandey and Raksha Bandhan.