Akshay Kumar’s ‘Mondays Blues’ Post Is Unlike Any Other, Netizens Ignore The Caption Completely

Akshay Kumar is facing Monday Blues but his kind of ‘Monday Blues’ is what anyone would take any day. The actor didn’t show the typical ‘blues’ and flaunted his blue shoes, stylish look and swanky car.

Akshay Kumar is facing ‘Monday Blues’ but his kind of ‘Monday Blues’ is what anyone would take any day. The actor, who is known for his disciplined style of lifestyle, didn’t show the typical ‘blues’ associated with the first day of the week, and seemed to flaunt his blue shoes and some class, from his stylish look to a swanky car behind him.

‘Monday Blues’ is not something that one would expect from Akshay, because of the fact that he is considered to be among the most hard-working actors in the industry. From hitting the bed at 10-11 PM and starting the day at 4-5 AM, avoiding late-night parties, alcohol, smoking, the actor’s style of living is well-known. Not to forget, he is among the busiest actors around, regularly doing 3-4 films over the years.

You’d naturally expect him to be at the peak of his energy levels in the morning, and that’s how his Instagram post looked like. The 51-year-old was dressed to kill in a T-shirt, matching jacket-trousers in a candid snap from abroad. The classy four-wheeler complemented his style brilliantly. The only blue that one could probably spot was his blue shoes, and that’s what he seemed to hint at.

No one noticed his #MondayBlues caption and almost every netizen was awed by his look, including his ‘Once Upon a Time Mumbaai Dobaara’ co-star Sophie Choudry, who posted the fire emoji on it. 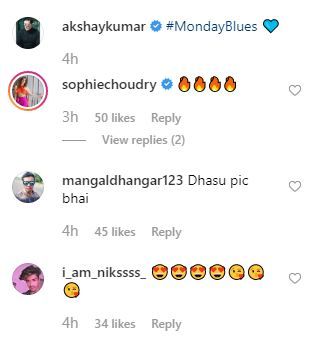 Akshay’s ‘Kesari’ was a hit earlier this year and three more of his films are gearing up for release this year. The first one is ‘Mission Mangal’, that is slated to hit the screens on August 15. This will be followed by ‘Housefull 4’ and ‘Good News.’

He is set to feature in three films already in the next year. ‘Sooryavanshi’ will be the first to release on March 27,  ‘Laxmmi Bomb’ is slated for a June 5 release, while the latest announcement ‘Bachchan Pandey’ will release on Christmas.