Alaya F recently took to Instagram to unveil the video of her new song 'Aaj Sajeya' leaving her fans and followers to go gaga over her gorgeousness.

Bollywood Alaya F is yet again winning hearts with her portrayal as a millennial bride in her new song composed by Goldie Sohel titled Aaj Sajeya. The star took to Instagram to unveil the news of her first-ever video. The netizens were at once taken over by Alaya's whimsical bridal look and went gaga over how beautiful she looks in the video. Take a look.

Sharing a snippet from her song Aaj Sajeya, Alaya F said that she is confident that her new song will make it into everyone's wedding playlist. In Alaya F's latest video, she plays the role of a whimsical and modern bride who prefers wearing sneakers over heels at her wedding and is seen enjoying all of her wedding festivities with her friends and family. The song also features Taha Shah Badussha who plays the role of the groom opposite Alaya's bridal character.

READ | Alaya F shares makeup routine on Instagram, compares her looks from 2015 and 2021

READ | Alaya F shares her rendition of the viral 'Buss It' challenge, fans call it 'epic'

Fans of the star were quick to shower their love and compliments on Alaya F's song and could not stop gushing about how beautiful she looks like a bride. Fans have been pouring a ton of heart emojis on the actors' post showcasing their love for her new song. One user wrote, "Wow amazing song" while another commented on Alaya F's and penned, "your smile is all we need." out some of these fan comments below; 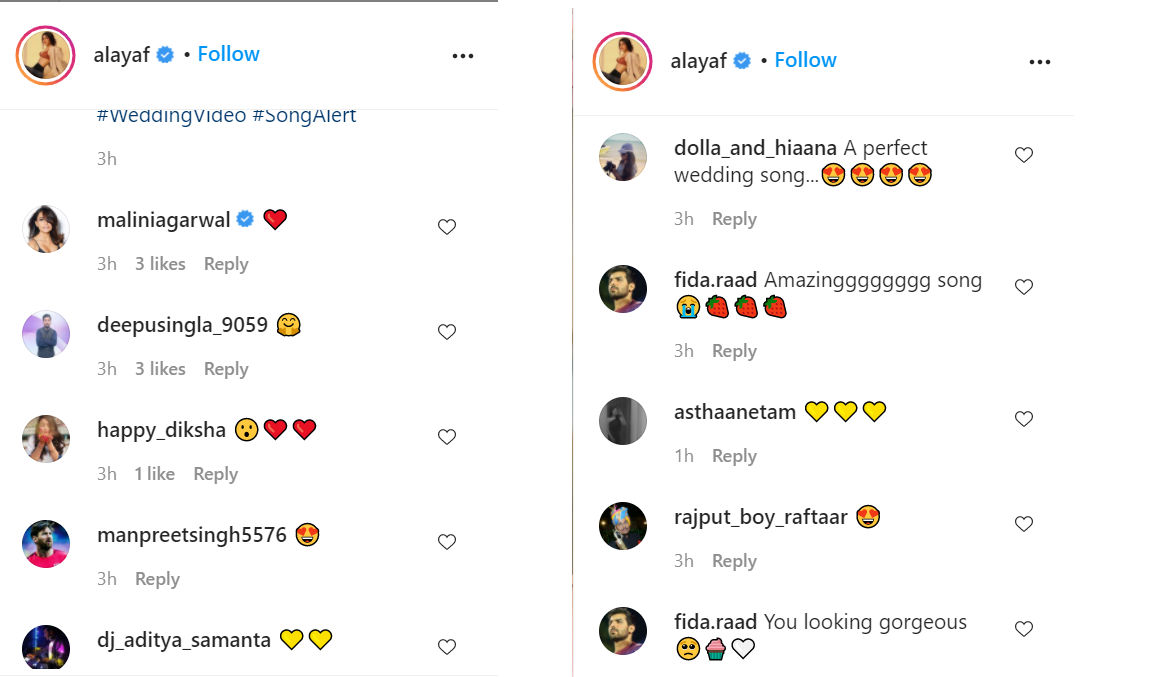 'Aaj Sajeya' has been trending on Youtube ever since its release and has already crossed 3.5 million views on the video-sharing platform.

Netizens on Youtube loved the song and the entire way the video was picturised. The Youtube comment section of the video is filled with how beautiful the song is and how much they loved the concept. 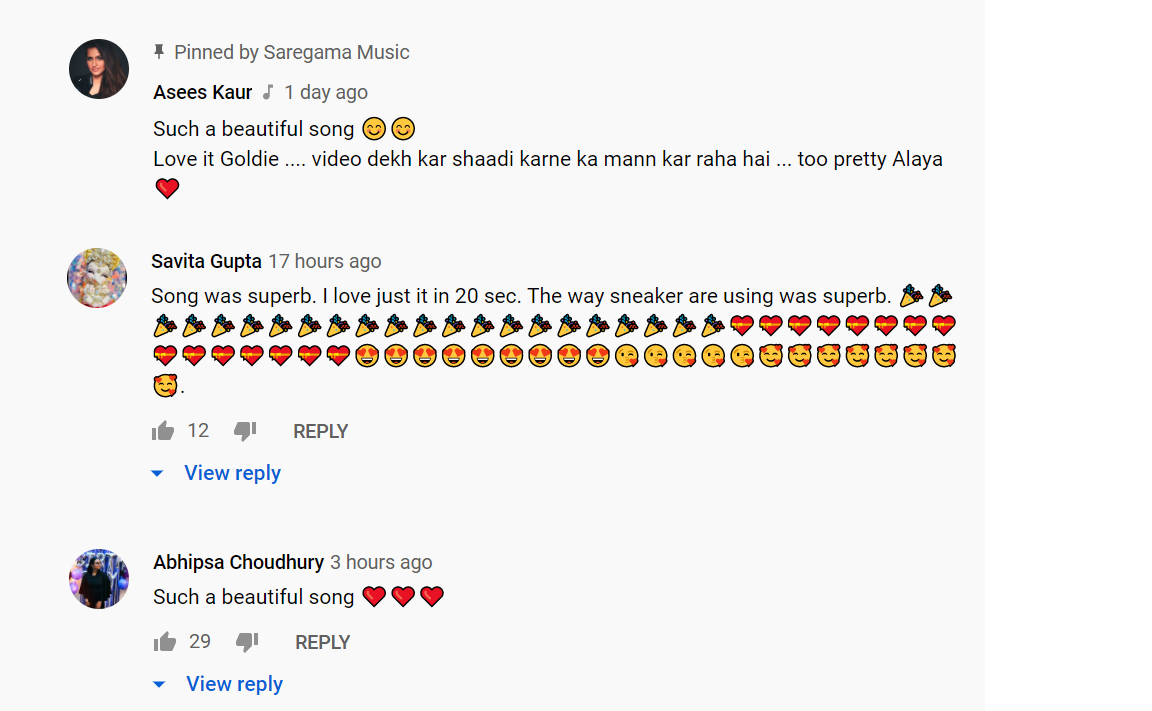 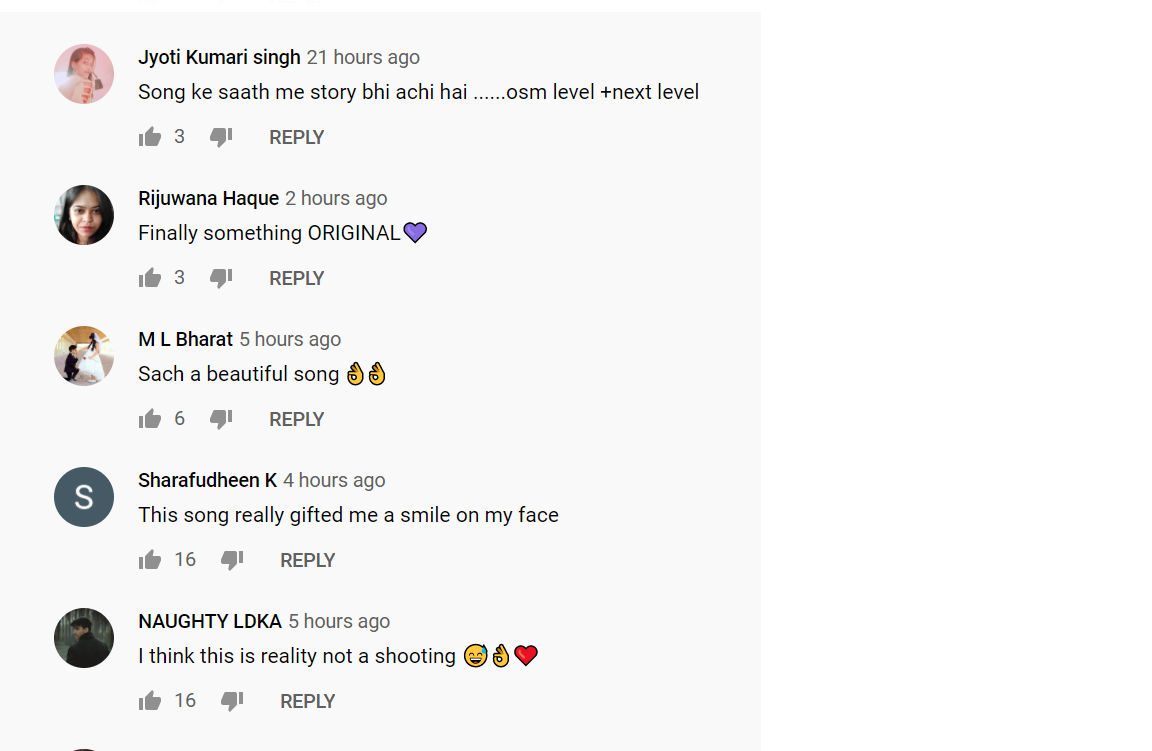 Alaya made her debut in 2020 with the comedy film, Jawani Jaaneman. Directed by Nitin Kakker, the film also starred Saif Ali Khan and Tabu. The plot of the movie revolves around a 21-year-old girl who claims that a 40-year-old man who hates marriage is her father. The movie received positive reviews from the audience and critics alike. She will next be seen in Ek Aur Ghazab Kahani which will be directed by Rajkumar Santoshi. The movie is scheduled to release in 2022.