In a video shared by the paparazzi on Instagram, Alia Bhatt was first seen getting out of the car. The paparazzi called for her but she continued walking further without replying to anything. She wore a baby pink and white salwar kameez along with a black face mask. Her hair was tied up in a neat bun and she carried a handbag. Ranbir got out of the car from the other side and was seen wearing a white t-shirt with blue jeans along with a blue cap and black face mask. While walking forward, he told the paps that entering the building premises is not right and they apologized to him. The caption of the post read, “#aliaabhatt #ranbirkapoor arrive at #neetukapoor home for #RishiKapoor death anniversary puja.” Take a look below.

On his first death anniversary, his wife Neetu Kapoor shared a black-and-white throwback picture of the couple and penned an emotional note on Instagram. In the caption, she wrote, “All of last year has been of grief and sadness around the world for us maybe more as we lost him .. Not a day has gone by when we have not discussed or reminisced him as he was an extension of our existence .. sometimes his wise advice:: his wise cracks : his anecdotes !! We have celebrated him all year with a smile on the lips as he will stay in our hearts forever  we have accepted life will never be the same without him !!! But life will go on .... #rishikapoor” 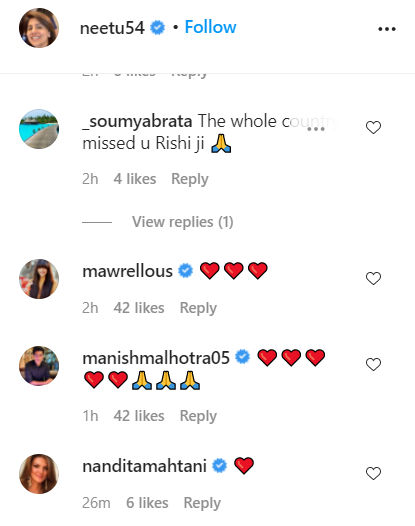 Rishi's daughter, Riddhima Kapoor Sahni also shared throwback photos with him on social media. In her caption, she said, "If only i could hear you call me mushk once more ..." and continued adding a saying from the author, Dorothy Mae Cavendish. She ended her note by writing, “I love you always.” Take a look below.