Alia Bhatt on Friday revealed that she has tested positive for COVID-19. She has immediately isolated herself and is currently under home quarantine

Coronavirus cases are increasing with each passing day across the country. With India going through a possible second wave of coronavirus, the general public to the Bollywood stars, all are constantly seen in the grip of the pandemic. Now, Bollywood actress Alia Bhatt, daughter of filmmaker Mahesh Bhatt, has tested positive for COVID-19. Announcing the same, the Raazi actress took to her Instagram handle, in the early hours of Friday, and revealed that she had immediately isolated herself after being tested positive and is now under home quarantine.

Alia Bhatt in her statement shared on her Instagram wrote, "Hello all, I have been tested positive for COVID-19. I have immediately isolated myself and will be under home quarantine. I am following all safety protocols under the advice of my doctors. Grateful for all your love & support. Please state safe & take care." 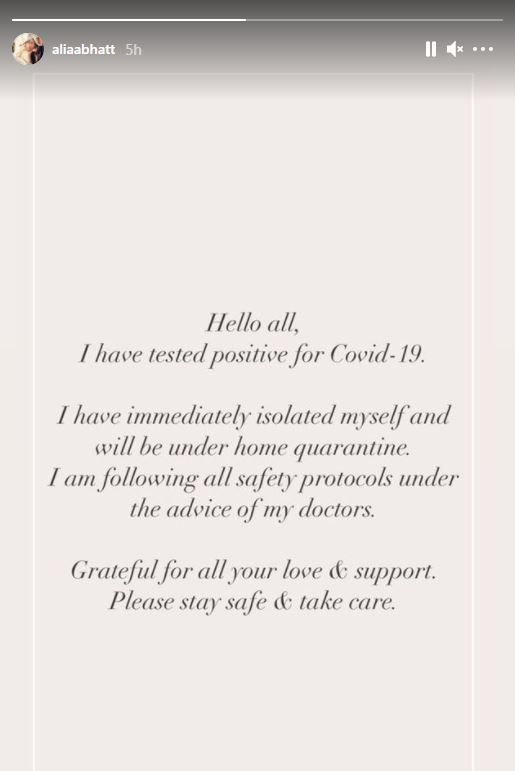 On the work front, Alia Bhatt's upcoming movie Gangubai Kathiawadi has attracted a lot of controversies. Ever since its teaser released in February, it has become a talking point, where Alia Bhatt was seen dressed in sarees, delivering strong dialogues and aggression, as she took on a prominent man of the region. Numerous film stars had then given a thumbs up to the makers.

An association of residents of Kamathipura area, which was known for the red light area that Gangubai Kathiawadi became popular in, alleging a ‘misrepresentation' of the place. The matter had also reached the Maharashtra Assembly as Maharashtra MLA Amin Patel demanded that its title be changed. He alleged that the title maligned the image of ‘Kathiawad city’ as well. Recently, Mumbai's Mazgaon Court also summoned film

Gangubai Kathiawadi's director Sanjay Leela Bhansali, actor Alia Bhatt, and writer of the film on May 21, on the plea of Babu Rawji Shah who claims to be the adopted son of Gangubai Kathiawadi and has stated in his plea that film tarnishes her image.