Fashion critic Diet Sabya, an anonymous Instagram account targetted Alia Bhatt's latest magazine shoot! In a 'Ask Me Anything' session on Instagram, a user asked Diet Sabya, 'What makes you cringe?'. To which, they answered 'Magazine's and their overt references. We mean chill the **** out bro!'.
The account used a derrogatory word.

READ | 'I Am Too Excited...Thanks For Calling Me A Good Person': Sanya Malhotra Reacts As Diet Sabya Calls Her Out For 'Gandi Copy'

The 'Raazi' actress didn't hesitate to give a stern reply to the fashion police. She wrote, "I shot for this cover on the 6th of February 2019. If I am not mistaken the apparent "reference" was only uploaded on 24th of Feb. Not to go all true detective on you guys.. but give a girl some credit. Toodles." 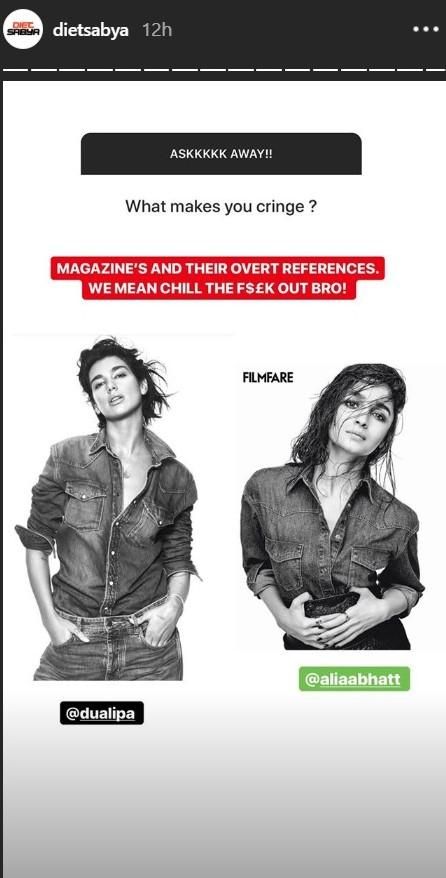 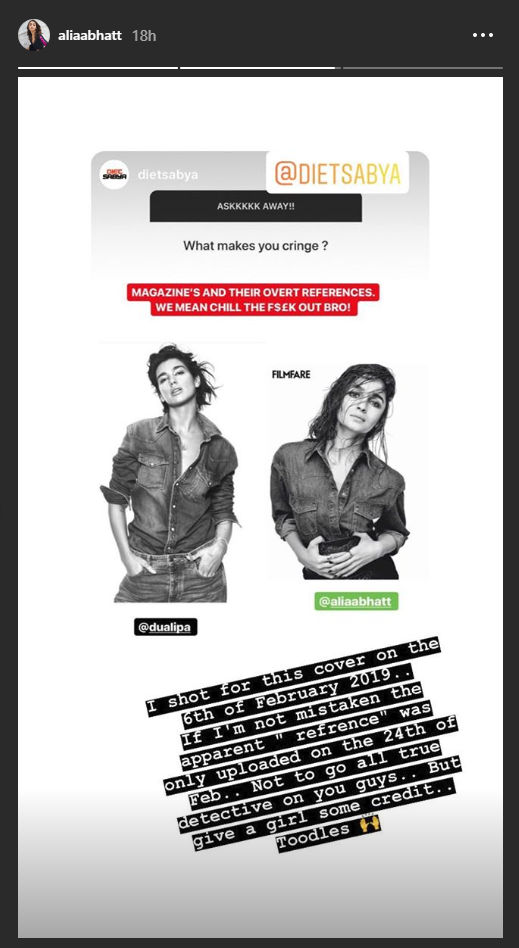 Meanwhile, on the work front, Alia Bhatt has a choc-o-block calendar with Ayan Mukerji's 'Brahmastra', with Ranbir Kapoor. A fantasy trilogy, the first installment is slated to release in 2019. She will also star in SS Rajamoulli's 'RRR' opposite Ram Charan.

The actress will be next seen in 'Kalank'. The teaser of 2 minutes was launched on March 12. While the netizens were mesmerized by the grandeur of 'Kalank' teaser featuring Varun Dhawan, Alia Bhatt, Sonakshi Sinha, Aditya Roy Kapur, Madhuri Dixit, and Sanjay Dutt in the lead, the film seems to be dealing with the conflict of love. A few felt that the overall vibe of the teaser looks like a leaf taken from Sanjay Leela Bhansali's book.

The period drama set in the 1940s will be helmed by '2 States' director Abhishek Verman and will be jointly produced by Karan Johar, Sajid Nadiadwala, and Fox Star Studios. It is all set to hit the theatres on April 19, 2019.