The makers of the much-anticipated film 'Kalank' released the first song from the multi-starrer venture titled 'Ghar More Pardesiya' on Monday, March 18 and the grandeur of the same has yet again won the hearts of the audience.

The makers of the much-anticipated film 'Kalank' released the first song from the multi-starrer venture titled 'Ghar More Pardesiya' on Monday, March 18 and the grandeur of the same has yet again won the hearts of the audience. The song starring Alia Bhatt, Madhuri Dixit and Varun Dhawan is a visual spectacle just like the teaser of the film. It shows Alia acing the Kathak moves as she shares the screen with legendary Madhuri Dixit.

READ: ‘You May Have To Send A Search Party To Find Me’: Alia Bhatt Reveals What Gave Her ‘sleepless Nights, Days And Months’

Following the release of the song, fans took to social media and reviewed the classic musical performance. Joining the bandwagon was, Bollywood actress Katrina Kaif. Lauding Alia's versatility and dancing skills, she wrote, "How beautifully you have danced".

Bollywood duo Katrina Kaif and Alia Bhatt are the new besties in town and are often spotted exchanging pleasantries on social media. Replying to Kaif's post, the 'Raazi' actress wrote, "You have no idea what your approval means to me.. Love you Katyyy. #Topchick." 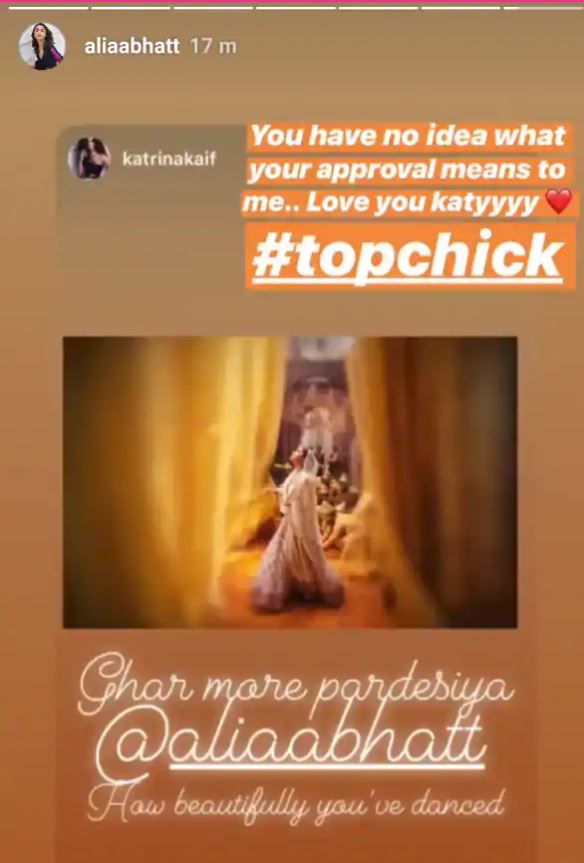 Meanwhile, the film's new song, features Varun Dhawan and Alia’s characters arriving at a religious celebration involving men dressed as Lord Hanuman and other gods. The latter happens to see a musical session being led by Madhuri Dixit in a palace and she too joins in and displays her vocal and Kathak skills, leaving the veteran impressed. The 'Jugalbandi' of the Bollywood divas mesmerised the audience although they express their desire of seeing Madhuri gracing the dance floor.

'Kalank', directed by Abhishek Varman, also stars Aditya Roy Kapur, Sonakshi Sinha and Sanjay Dutt and is all set to hit the box office on April 17.

READ: 'Is There Anything You Can’t Do!?': Dia Mirza Praises Alia Bhatt For Her Performance In 'Kalank' New Song 'Ghar More Pardesiya'

PEOPLE HAVE PLEDGED SO FAR
Did Kriti Kharbanda's Net Worth surge after Housefull 4's stellar run at BO? Find out
Kartik Aaryan is all smiles as he shares his character's look for 'Bhool Bhulaiyaa 2'; see
Kunal Kemmu has 'the whole world in his hands'; here's why
Amyra Dastur announces new project, joins 'Dongri to Dubai' cast
Priyanka Chopra rocks casual & comfy look at the airport as she arrives in India; see pics
DO NOT MISS
ROMI DEV ON '83'
SOUVENIR TO BE GIFTED TO TRUMP
SHAHEEN BAGH MEDIATOR MOVES SC
SPECIAL 'ALL-VEG' MENU FOR TRUMP
THACKERAY SLAMS BJP
SHARMA BAGS 11TH 5-WICKET HAUL