On the occasion of Karwa Chauth, legendary star Amitabh Bachchan shared a priceless photo with his wife and veteran actor Jaya Bachchan. Take a look - 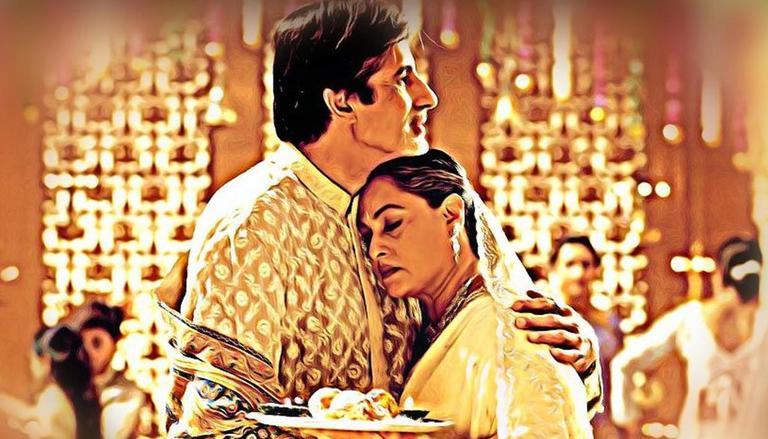 
The Hindu festival of Karwa Chauth is the celebration of love between a married couple. The festival is considered one of the most sacred traditions for married women who observe fast from sunrise to moonrise for the prosperity, well-being and long-live of their husbands. It is celebrated in various parts of the country. On the occasion of Karwa Chauth, legendary star Amitabh Bachchan shared a priceless photo with his wife and veteran actor Jaya Bachchan.

Taking to his social media handles, Amitabh Bachchan recently shared an iconic photo with Jaya Bachchan from the 2001 romance drama film Kabhi Khushi Kabhie Gham. The photo had Big B and Jaya Bachchan in ethnic cream-coloured ensembles, hugging each other. Sharing the photo, he wished his fans and wrote, "करवा चौथ की अनेक अनेक शुभकामनाएँ. सब कुशल मंगल हो." (Many many wishes on Karwa Chauth. Good luck everyone). The actors' fans were delighted to see the photo and showered them with love.

Amitabh Bachchan often shares throwback photos with Jaya Bachchan via social media. Last month, the legendary actor shared a monochrome photo with Jaya Bachchan from their first film, Bansi Aur Birju. The photo had the two actors hugging each other. Sharing the photo, Big B mentioned it has been 49 years since their first film was released. He wrote, "our first film together .. ‘Bansi aur Birju ‘ .. released Sept 1, 1970 .. that’s 49 years ago !!!"

READ | 'So grateful to be her son', writes Abhishek as Jaya Bachchan marks 50 years in cinema

On the work front, Amitabh Bachchan last starred in the film Chehre alongside Emraan Hashmi. The actor is currently serving as a host of KBC 13. He has several projects in his pipeline. Big B is gearing up for the release of his upcoming film, Mayday. He will also star in Jhund, Goodbye, Brahmastra, and Project K. He will also star in the official Hindi remake of The Intern opposite Deepika Padukone.

WE RECOMMEND
Amitabh Bachchan goes ballroom dancing with Kriti Sanon on 'KBC' to relive college day
Happy Karva Chauth 2021: Story, History and Significance; All You Need to Know
'KBC 13' contestant stumps Amitabh Bachchan with query on Taapsee Pannu; here's her answer
Amitabh Bachchan amused to meet fan who painted his car with his films' dialogues; See pic
KBC 13: Legendary actor Amitabh Bachchan sheds light on the story behind his surname
Listen to the latest songs, only on JioSaavn.com