On Sunday afternoon, megastar Amitabh Bachchan indulged in a recording session as he contemplated food and love. Read on to know more about the same. 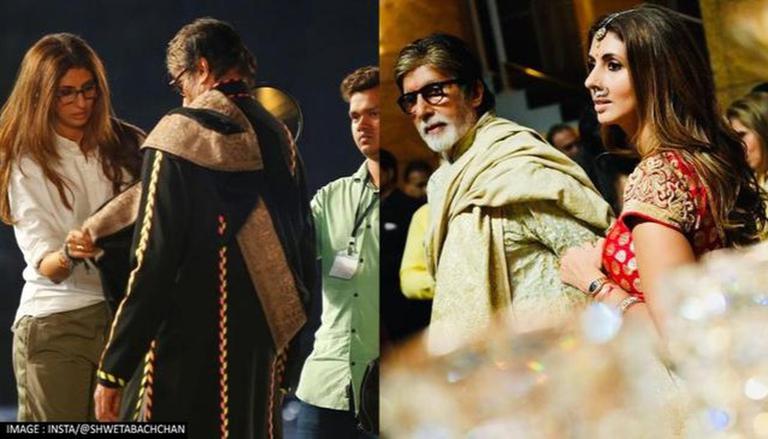 
Megastar Amitabh Bachchan indulged in a recording session on Sunday afternoon as he contemplated food and love. It so happened that after Big B shared his thoughts pertaining to the same online, his daughter Shweta Bachchan caught a typing error in the actor's post. She took to the comment section to joke about the same, thereby giving yet another glimpse of their amicable father-daughter bond.

'Music be the food for love': Amitabh Bachchan

In the latest post, the Bollywood megastar can be seen donning a quirky jacket which is matched with black comfy trousers. Seated on a sofa, Amitabh looks busy contemplating in front of the mic recorder. While sharing the image online, Big B revealed what was on his mind when the candid photo was captured. He wrote, "music be the food for love and so much more .. in contemplation of it at recording". Take a look at the post below:

As soon as the post caught the attention of his daughter Shweta, she quickly responded to it in the most hilarious manner. Shweta corrected her father's typing error in the comment section and wrote, "Food 'of' love. Slight typo dear father (sic)". It is important to note that the details of the recording session remain unclear as of yet. Whether it is for a dubbing session or Big B has a surprise track or poem in store for fans will only be known once the star makes it official. 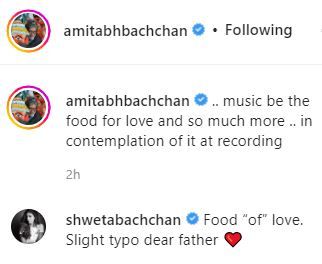 After featuring in approximately 175 Hindi movies, the Jhund star is now gearing up to make his debut in Gujarati Cinema. As reported by ANI, Bachchan will be seen essaying a cameo role of a Gujarati man in a movie titled, Fakht Mahilao Mate. Touted to be a female-centric comedy flick, the upcoming movie is a joint production of Vaishal Shah and Anand Pandit. During his latest interaction, Anand Pandit recalled the time he approached the superstar with his script, thereby revealing Big B gave him an 'instant' yes. Fakht Mahilao Mate is all set to premiere on August 19, 2022.