Ananya Panday and Shanaya Kapoor's video as kids dancing to the tunes of a Bollywood song was posted by Shanaya's mother recently. Read below for more.

Both Ananya Panday and Shanaya Kapoor have been the best of friends since their childhood. Ananya, Shanaya and Suhana Khan are often seen hanging out together and getting clicked by the paparazzi. Now, Shanaya Kapoor's mother Maheep Kapoor has taken to her social media and shared a throwback video of Ananya and Shanaya where they're seen dancing to a Bollywood song at Ranbir Kapoor's sister, Riddhima's wedding.

Little Ananyan and Shanaya's video dancing to a Bollywood song

The video featured above is reportedly from Riddhima Kapoor Sahni's Mehendi function. Both Ananya Panday and Shanaya Kapoor can be seen grooving to It's the Time to Disco song from Kal Ho Naa Ho along with their old-time friend Nirvan. Both Ananya and Shanaya are seen sporting ethnic outfits in the video. While Ananya Panday can be seen sporting a red lehenga, Shanaya is sporting a pink one.

Also read: Ananya Panday calls Chunky Panday with the sweetest nickname as he congratulates her

The video was received with many adorable comments for both Ananya and Shanya from well-known celebs like Neetu Kapoor, Riddhima Kapoor Sahni and Amrita Arora. Ananya Panday too left a funny comment on Maheep Kapoor's post. Check it out below - 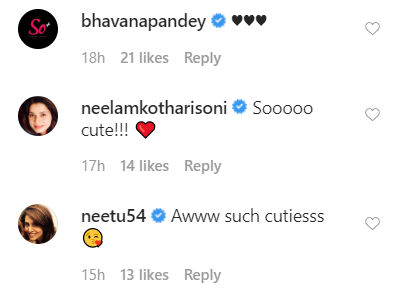 PEOPLE HAVE PLEDGED SO FAR
Malaika Arora on her separation from Arbaaz: “Everyone was against it initially”
'Eat well, keep exercising': Sanjay Dutt urges fans to maintain fitness amid lockdown
Urvashi Rautela's photos that show how to rock the trench coat
Here's an interesting trivia about superstar Anil Kapoor that every fan must know about
Kangana Ranaut explains why Lord Ram is the "most important icon of our civilization"
DO NOT MISS
UNITE AND FIGHT CORONA: PM MODI
AIR INDIA SIGNS CONTRACT
MAHARASHTRA COVID-19 TALLY
24-HOUR CURFEW IN MECCA & MEDINA
'9000 MARKAZ CONTACTS TRACED'
FANS EXCITED FOR KOHLI-KP TALK