Ananya Pandey, who was summoned by the NCB on Friday for the 2nd time, was interrogated for nearly four hours over links to Aryan Khan & cruise drug bust case 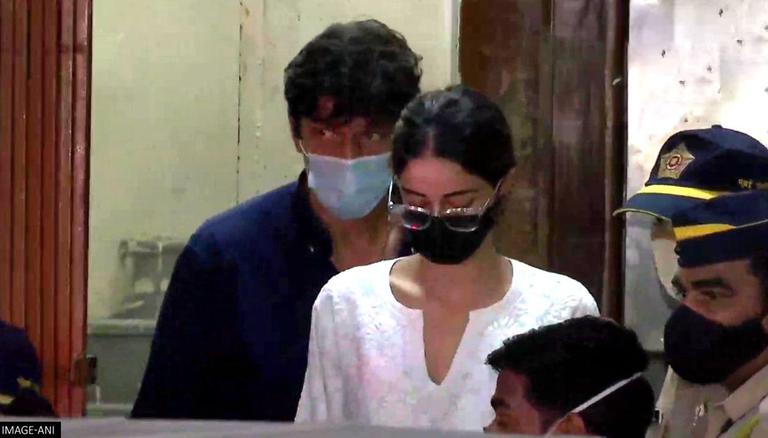 NCB DDG Ashok Mutha Jain informed reporters that Ananya Panday has been summoned again for interrogation in relation to the drug must case on Monday. This is the third summon issued to Chunky Panday's daughter Ananya over her links to Shah rukh Khan's son Aryan in the drug bust case.

#BREAKING | Third summon to Ananya Panday by NCB; asked to appear before NCB on Monday for further interrogation. She has been quizzed by NCB on Thursday for 2 hours & Friday for 4 hours; tap for more updates here https://t.co/oefJxIhn1D pic.twitter.com/bKK3mcc1vw

In the latest development in the Mumbai cruise drug bust case, Bollywood actor Ananya Pandey, who was summoned by the Narcotics Control Bureau (NCB) on Friday for the second time, was interrogated for nearly four hours after alleged her chats with Bollywood megastar Shah Rukh Khan's son Aryan Khan were uncovered. Ananya Panday arrived at the NCB office at around 2.25 PM and walked out at 6:20 pm. Sources added that NCB Zonal Chief Sameer Wankhede and DDG Mutha Ashok Jain were discussing about issuing summons again to Ananya Panday and that the decision would be taken shortly.

Sources informed Republic TV that Ananya Panday had reportedly denied reports claiming that she had allegedly arranged Ganja for Aryan and that regularly talked about drugs on chats. "Ananya denied the supply related talks in the chat conversation and told the NCB officials that she has never consumed or supplied the drugs," ANI quoted NCB sources as saying. Earlier, alleged WhatsApp chats revealed the two were talking about arranging 'Ganja'.

Earlier, the NCB sources informed Republic that Ananya Panday replied that she was 'joking' when the agency officials questioned her over her chats with Aryan. However, the chats between Aryan Khan and Ananya Panday have revealed that both individuals were discussing the procurement of marijuana wherein Panday stated that she can arrange it, sources added.

The agency officials on Thursday conducted a raid at Ananya Panday's residence at Pali Hill in Mumbai's Bandra area as investigation widens. The raid was led by NCB's VV Singh. Following that, Panday was summoned to the NCB's Mumbai office. Around 4 pm, Ananya Panday and her actor-father Chunky Panday reached the NCB office. After recording her statement, Ananya Panday left the NCB office around 6:15 pm after almost 2 hours of questioning. Sources informed us that NCB Zonal Director Sameer Wankhede questioned the actor in the case.

The bail petition of Shah Rukh Khan's son Aryan Khan will be heard by the Bombay High Court on October 26. This comes after a special NDPS court had rejected bail pleas of Aryan Khan, Munmun Dhamecha and Arbaaz Merchant on Wednesday. The 23-year-old is currently lodged at the Arthur Road prison. On Thursday, SRK made his first public appearance after Aryan's arrest by NCB in the drugs case, visiting his son in jail.