After being away for a month to shoot for 'Uunchai,' Anupam Kher recently reunited with his mother, and their conversation will leave you smiling. Watch. 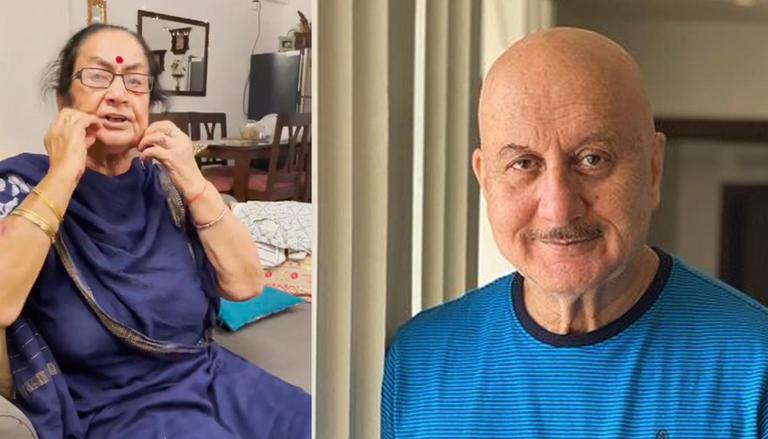 
Veteran Bollywood actor Anupam Kher shares a strong bond with his mother, Dulari. The actor often treats his fans with some interesting yet funny conversations with his mom via Instagram. As the actor was away for a month to shoot for the film Uunchai in Nepal, he recently reunited with his mother, and their conversation was like any other mother-son duo.

Taking to Instagram, Anupam Kher recently shared a video of him getting scolded by his mother, Dulari. In the video, Anupam Kher asked his mother whether he was looking thinner. In return, the actor's mom suggested he eat more and got mad at him for not having enough food. She also compared him to a Kashmiri dried fish and said he should not get any thinner.

The actor was then delighted as his mother gifted him a shirt. He also offered his mother some of his paratha, which she liked. Sharing the video, Anupam Kher wrote, "Met Mom after a month. She immediately called me #Sukda (very thin). Made unbelievable faces! Then added that I look like a #Hoggard. Kashmiri word for dried fish. But then I got two nice shirts. She also liked the parantha I offered her. (sic)" The actor also mentioned how he enjoys spending time with his mom and wrote, "It is impossible to have a dull moment when she is around!!"

Anupam Kher reveals shooting for Uunchai was a life-changing experience

Anupam Kher was shooting for his 520th film Uunchai in Nepal for the past few months The actor had some memorable experiences in the mountainous region, including overcoming his fear of crossing a rope bridge and trekking in freezing weather. Last week, he announced the film's first schedule's wrap and mentioned how shooting for the movie was a life-changing experience for him. The New Amsterdam actor wrote, "Finally the first shooting schedule of Sooraj Barjatya’s magnum opus Uunchai in #Nepal is wrapped. It has been a 27 days of life-changing experience. It forced me to challenge my potential and reinvent myself! Both as an actor and as a person! Jai Ho!! (sic)"

Uunchai also stars Parineeti Chopra and Boman Irani. The film is being directed by ace filmmaker Sooraj Barjatya. Uunchai will mark Anupam Kher and Sooraj Barjatya's fourth collaboration. The film will also have Amitabh Bachchan for a brief role.

READ | Anupam Kher shares a glimpse from 'Uunchai' shoot, reveals he is a nervous flyer