Anupam Kher conveyed gratitude to his fans and followers for their wishes for Kirron Kher’s health after she was diagnosed with myeloma, a type of blood cancer. The actor wrote that the Bharatiya Janata Party Member of Parliament from Chandigarh had conveyed her gratitude for the prayers and words of motivation. The duo, along with son Sikandar, termed their well-wishers ‘wonderful’ and that they were 'humbled' by the concern and blessings.

Anupam Kher thanks netizens for wishes for Kirron Kher

Taking to social media, Anupam Kher posted a video, where he was heard saying, “My dear friends, thank you very much for your prayers and best wishes that you have sent for Kirron ji so that she recovers soon. Your messages of love and confidence has raised our morale. And we are completely hopeful that Kirron will come out of this phase and successfully leave this disease behind."

"I am grateful for the immense emotional support that you all have given, conveying my message on behalf Kirron and Sikandar too. Thank you. And for all such families, where one member is battling an illness like cancer, I pray that they too recover soon,” he added.

The video received love from the celebrities of the film industry, including Varun Dhawan, Tiger Shroff, Hariharan, among others. 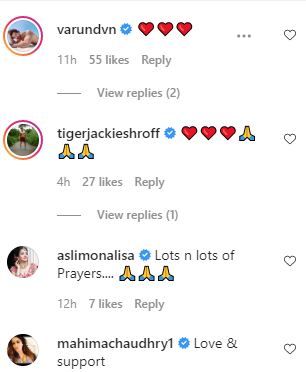 Anupam Kher and Sikandar had issued a statement on Thursday 'so that rumours don't get the better of a situation' after Chandigarh BJP President Arun Sood had spoken about Kirron Kher's illness.

"She is suffering from multiple myeloma. She is recovering well from the disease which was detected last year," Sood said. Kher had suffered a broken arm in November last year. Her diagnosis of multiple myeloma was confirmed after she underwent a PET scan,at the Post Graduate Institute of Medical Education and Research (PGIMER).

The A Wednesday star called Kirron as a 'fighter' and that she will come out of the phase strongly. The veteran had also stated that that she was being looked after by a 'phenomenal set of doctors.' Kher had written, 'She's all heart' as the reason for the love for her, and urged fans to send their wishes as she was 'well on her way to recovery.'