Arjun Kapoor Pens Emotional Note For Siblings On Raksha Bandhan: 'They Mean Everything'

Actor Arjun Kapoor took to Instagram and shared pictures with his sisters while penning a heartfelt note to thank them on the special day. 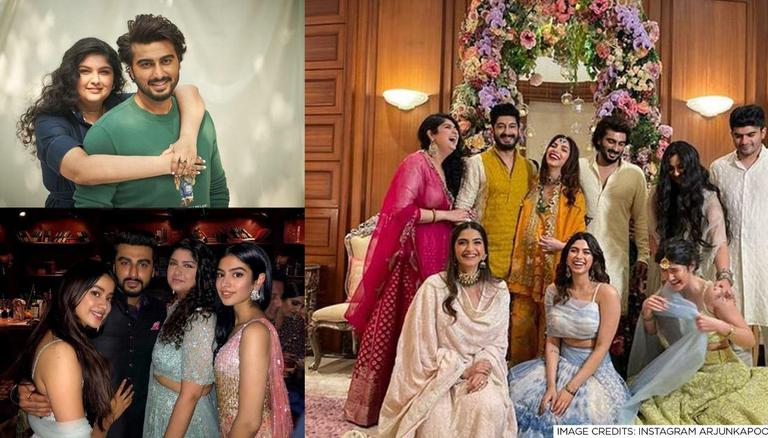 
The entire young Kapoor clan gathered on the auspicious occasion of Rakshabandhan while sharing their love for their siblings. Actor Arjun Kapoor took to Instagram and shared pictures with his sisters while penning a heartfelt note to thank them on the special day. Arjun was brought up among many siblings and cousins, including Sonam Kapoor, Rhea Kapoor, Harshvardhan Kapoor, Mohit Marwah, Shanaya Kapoor, and Jahaan Kapoor. He has one sister, Anshula Kapoor, and two half-sisters, Janhvi Kapoor and Khushi Kapoor.

The actor, who is quite close to his siblings and jell well with them, shared pictures of himself with his gang and penned an emotional note. From childhood photos to some from Rhea Kapoor and Karan Boolani's recent wedding, the actor's post featured them all. In the heartwarming note, the Ki and Ka actor confessed how his siblings mean everything to him in his life and he wishes to continue that forever. “So last week one of my sisters got married & it made me realise that how quickly life changes !!! So many variables & possibilities on the horizon for all of us, but what keeps us grounded always is one constant - Brothers & Sisters (sic)."

He added, "As long as I can remember my siblings have been everything in my life & may that always continue... Here’s to my brothers & sisters - Happy RakshaBandhan. Love you all (sic)." The actor also tagged all his brothers and sisters in his Instagram post. Arjun has always been vocal about his bond with his sister Anshula and how the two of them supported each other after their mother’s demise.

Director Boney Kapoor's oldest children have often maintained an extremely close relationship. Arjun and Anshula Kapoor's mother, Mona Shourie, passed away in 2012 after she lost a tough battle with cancer. In 2017, Arjun Kapoor spoke to Huffington Post about the impact his mother's death had on him and his sister. He said: My sister, Anshula, has stood by me like a rock. She has gone through far worse. She’s younger than me. I still had 11 years with my father living in the house. I had my mother living with me for 25 years but she only got 20. Imagine a child who has been through a life where the father couldn’t be physically around all the time after the age of five. And the mother who was there physically ill all the time and then after 20 years, she wasn’t there. Imagine the psychological scarring of that child. She’s still more mature, very well-educated, honest, and more sincere than me.

Meanwhile, on the work front, the actor was last seen in Netflix's Sardar Ka Grandson. The actor played the role of a young Sikh man who leaves no stone unturned to fulfill his grandmother's wish. Apart from this, Arjun was also seen in Dibakar Banerjee's Sandeep Aur Pinky Faraar alongside Parineeti Chopra. The two actors received a lot of praise for their performance in the film. He will next be seen in Bhoot Police, Ek Villain Returns, and Kuttey.

READ | Sonam Kapoor and Arjun Kapoor are all smiles at their cousins' baby shower; see pictures