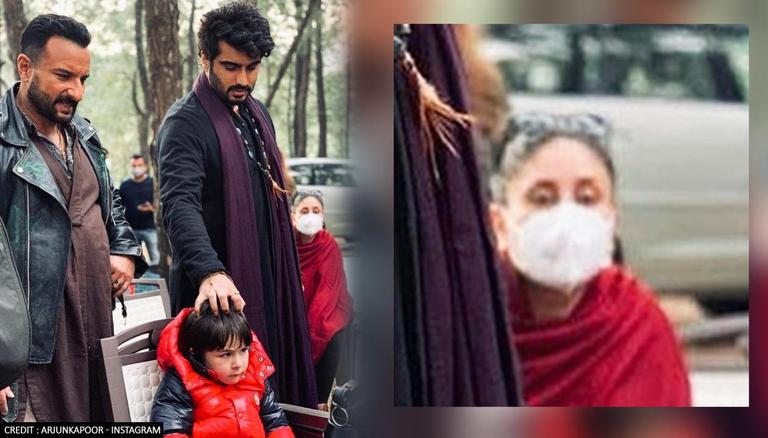 
As Kareena Kapoor Khan clocked her 41st birthday on September 21, several Bollywood celebrities took to their social media handles to wish the diva. Jumping slightly late on the wishing bandwagon, Arjun Kapoor wished his Ki & Ka co-star with a goofy belated birthday post on Instagram today. Arjun uploaded a candid click with Saif Ali Khan and Taimur, likely from the sets of the duo's latest flick Bhoot Police, where Kareena can be seen blurred in the background.

Arjun can be seen goofing around with Kareena'a little one, as Saif looks on. Teasing the star, Arjun mentioned how he wanted an excuse to upload the photo with 'Tim and Nawab Saab', further adding that Kareena will still be the 'centre of attention in every frame'. Kareena replied to Arjun's sweet birthday post, saying she'll always 'steal the boys thunder'.

Sharing the photo on his Instagram handle on Thursday, September 21, the Half Girlfriend actor wrote," Happy belated birthday Bebo !!! I just wanted an excuse to post this image of Tim, Nawab Saab & Me but we all know even out of focus you shall always be the centre of attention in every frame...". Lauding their good times on and off the screen, he added that Kareena Kapoor will also be made part of the Bhoot Police sequel. Take a look.

Kareena Kapoor had an equally savage response to the actor's post, and wrote, “Oiiiii so true your caption is (heart-eyed emoji and laughing emoji) …always gonna steal the boys thunder…love you tons.”.Kareena and Arjun have been spotted together on several occasions with Sif Ali Khan and Arjun's rumoured girlfriend Malaika Arora. Malaika and Kareena are also a part of the close-knit girl gang including Karisma Kapoor and Amrita Arora.

Kareena clocked her birthday with kids Taimur, Jeh, and husband Saif Ali Khan on a beach destination. Kareena, who has been dropping enticing glimpses of her vacation, shared her birthday celebrations in a recent post, showcasing a fire sign that read ‘Happy Birthday’. The photo features Saif and Taimur twinned in Pyjamas while she was clad in a fancy dress while carrying her toddler Jeh.

READ | Arjun Kapoor shares a 'blast from the past' to wish cousin Akshay Marwah on birthday; see
READ | Malaika Arora says Arjun Kapoor knows her inside out; says, 'He understands me'

WE RECOMMEND
As Kareena Kapoor turns 41, Kangana, Kiara & other celebs extend heartfelt wishes for her
Saif Ali Khan cracks up as Arjun Kapoor rightly guesses how to cheer up Kareena Kapoor
Kareena Kapoor Khan makes THIS 'birthday promise' to herself, shares pic with Saif &Taimur
Malaika Arora says Arjun Kapoor knows her inside out; says, 'He understands me'
Arjun Kapoor shares a 'blast from the past' to wish cousin Akshay Marwah on birthday; see
Listen to the latest songs, only on JioSaavn.com