Filmmaker Anubhav Sinha's 'Article 15' which released Friday is facing flak from members of Brahmin outfits in different parts of the country. In response to the criticism, Sinha lost his cool on Twitter and used derogatory words.

Filmmaker Anubhav Sinha's 'Article 15' which released Friday is facing flak from members of Brahmin outfits in different parts of the country. While majority of fans and critics have praised the powerful film, a section of the society didn't appreciate the treatment.

The film, which is inspired by the heinous 2014 Badaun rape incident where two teenage girls were gang-raped and murdered, has reportedly earned the ire of members of the community, who say the story has been made with the intention to defame the community, according to the media reports.

Criticizing the film, a Twitter users wrote to Anubhav Sinha and the director lost his cool on the microblogging site that resulted in him using fowl and abusive language in response. 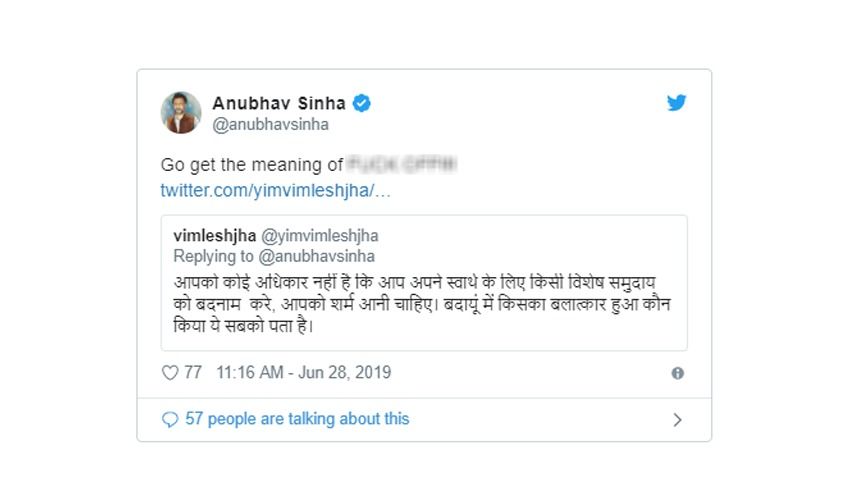 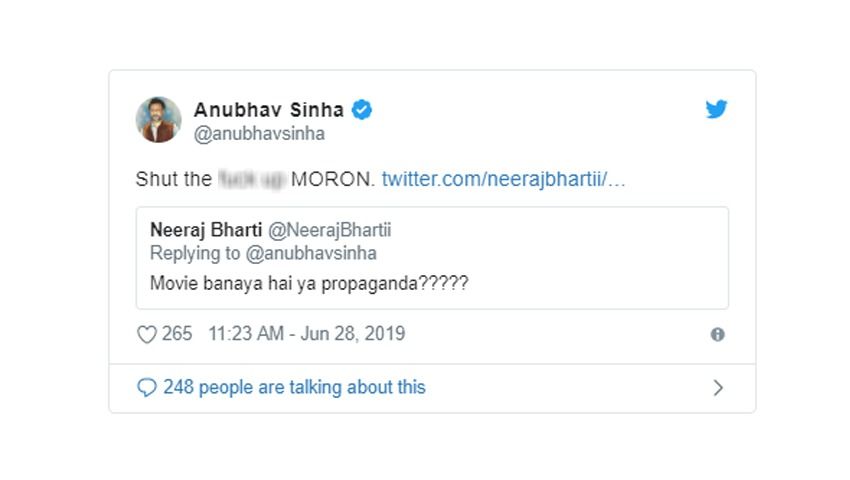 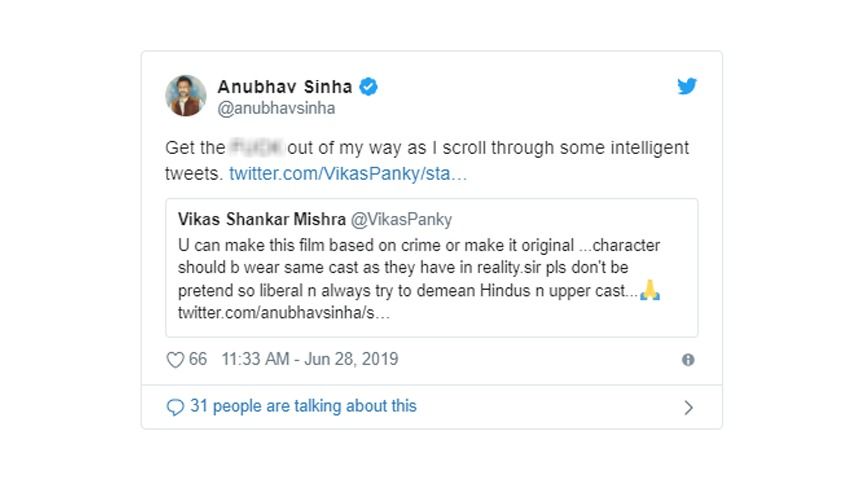 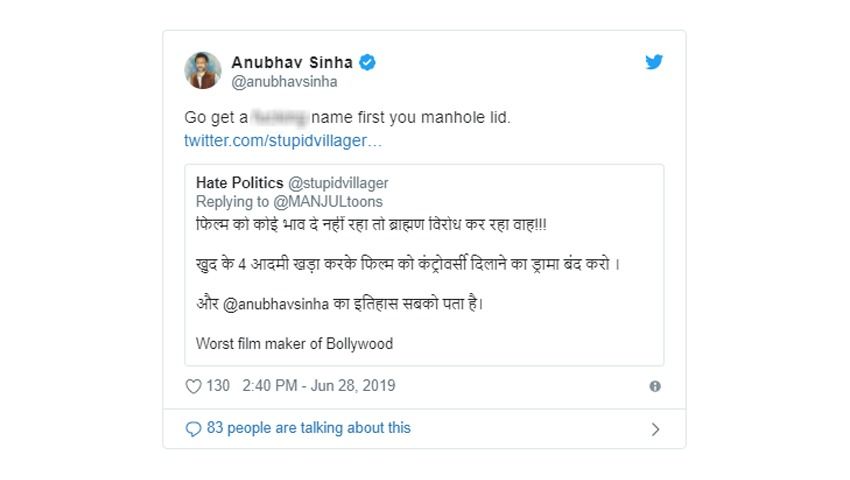 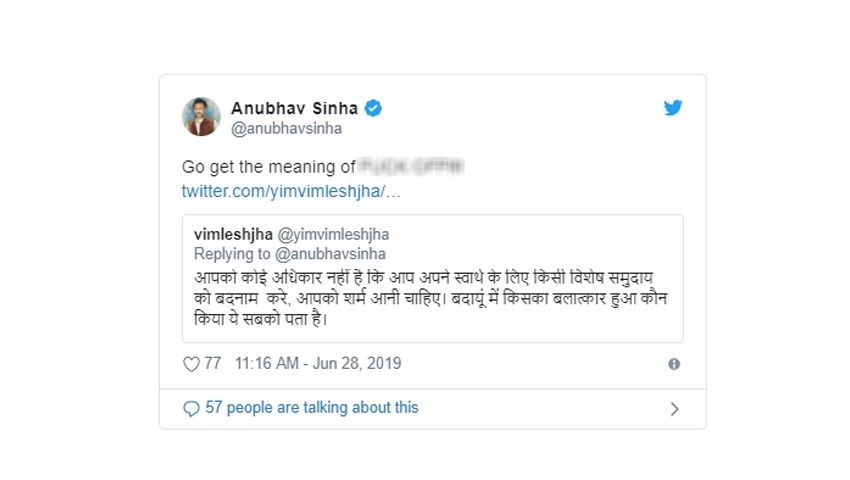 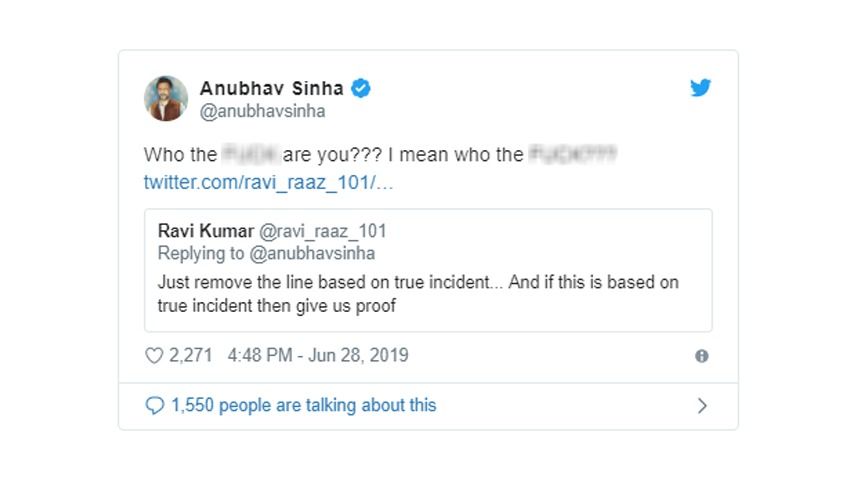 "We the members of Akhil Bhartiya Brahmin Samaj are protesting against this film 'Article 15' from last 15 days. The director of the film says a movie is made to showcase malpractices of the society, which is true, but such movies should be made on true incidents. This film is made on the claims that it is based on Badaun gang-rape incident but the truth is none of the members of the Brahmin community was involved in that incident. In this film the makers have portrayed our community as the cruel and aggressive group who oppresses the Dalit community, because of which Brahmin Samaj is displeased," said one of the members of the Akhil Bhartiya Brahmin Samaj.

The members of the community have also requested the government to listen to their plea to stop 'Article 15' from releasing.

"We have also given a letter to the district collectors; if even after this the authorities don't listen to us we will be compelled to make our protest more aggressive and loud. We will stop such films from releasing in every city, every district which spread violence in the society," added the member.

In Nagpur, the Brahmin community protested outside a movie theatre by hitting posters of the films with footwear.

An open letter to all offended from my film's trailer #ARTICLE15 pic.twitter.com/LE8QTjpkLx

"The film is showcasing Brahmin community as mean and rapists and that's why we are revolting against it. Even after this, if the movie is released, Brahmin communities from around the country will lodge FIR against Anubhav Sinha," said Manish Anand Trivedi, member of Brahmin Sena, Bhopal. The protestors also feel that the flick's name is not appropriate.

"The director has also broken the law by keeping the name of the movie after an article of the constitution. We won't tolerate such dictatorship in India," he added.

On Thursday, during the special screening of the film, actor Ayushmann Khurrana had said, "Today Anubhav Sir (Anubhav Sinha, director) has issued a statement in which he has cleared that the movie is not against any community."