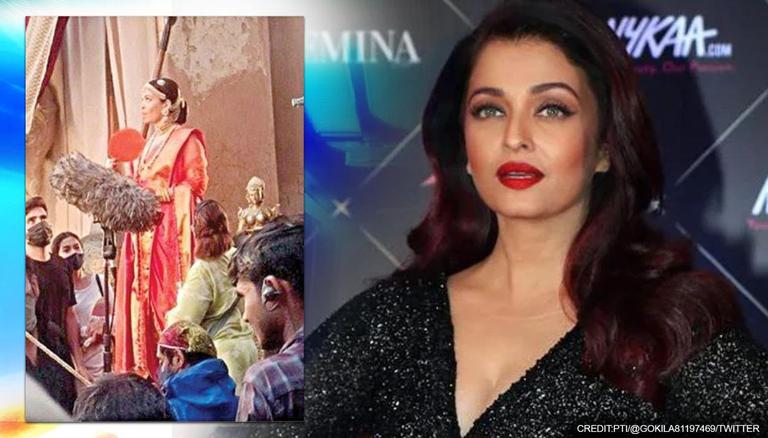 
Actor Aishwarya Rai Bachchan is set to star in director Mani Ratnam's period film, Ponniyin Selvan, wherein her look had been kept under wraps for a long time. Now, a photo of the actor from the film's sets has been leaked online, where she can be seen adorned in ethnic attire. The movie, whose shoot is slowly progressing in Orchha, Madhya Pradesh, will see Aishwarya essaying two roles, Nandini and Mandakini Devi. The Tamil historical drama is an adaptation of Kalki Krishnamurthy's 1955 novel of the same name.

As soon as Aishwarya's royal look from the movie surfaced online, Netizens have been sharing overwhelming responses as they await to see their favourite actor mark her return to the film industry.

In the photo, Aishwarya Rai can be seen decked up in a pink silk saree, standing on a platform as she waves a fan in her face. She is adorned like a queen in heavy gold jewellery including bangles, earrings, maang tikaa, necklace among other ornaments. The actor is surrounded by the crew and her assistant as she gets ready for a scene. Have a look.

As soon as the photo went viral, the eagle-eyed netizens couldn't contain their excitement on seeing a glimpse of their beloved actor. One user Tweeted," NO INDIAN ACTRESS CAN PULL OFF HISTORICAL/PERIOD FILMS LIKE AISHWARYA RAI BACHCHAN All Hail the Queen..", while another mentioned," Omg..!! Aishwarya Rai Bachchan spotted on the sets of #PonniyinSelvan Really very excited to watch this movie". One also hailed the actor as the 'Queen of Period Drama'.

The actor will reportedly essay a dual role of Nandini, the film's main antagonist and her mother Mandakini. The film chronicles the story of one of the most powerful kings in the south, Arulmozhivarman, who went on to become the great Chola emperor Rajaraja Chola I. Aishwarya's character Nandini, the wife of Periya Pazhuvettaraiyar (played by Sarathkumar) will be seen plotting the fall the Chola dynasty.