As 'Bheed' Wraps Up, Dia Mirza Thanks Director Anubhav Sinha For 'precious Experience'

Dia Mirza headed to her Instagram account on Sunday and penned down a note of gratitude to Anubhav Sinha, the director of her upcoming film, 'Bheed' 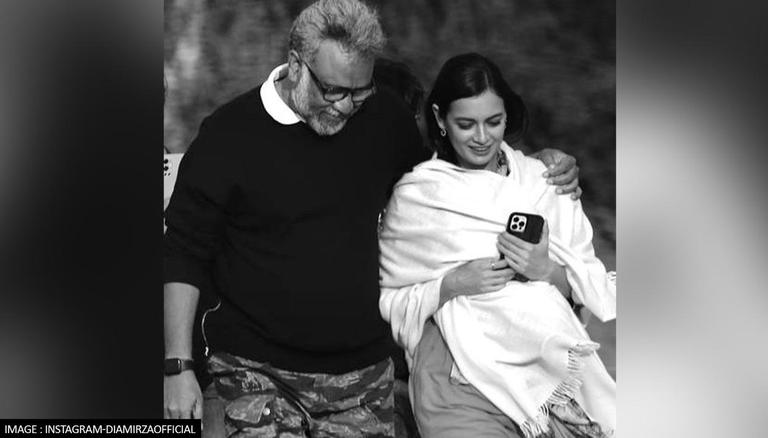 
Dia Mirza headed to her Instagram account on Sunday and penned down a note of gratitude to Anubhav Sinha, the director of her upcoming film, Bheed. She thanked him for 'yet another precious experience' as the duo also worked together on the sets of Thappad. The upcoming film will star Bhumi Pednekar and Rajkummar Rao alongside Dia Mirza.

Mirza shared a black and white picture of herself and the director and penned down a note of gratitude. She wrote, "Iss #Bheed ke rooh ki awaaz seedhe insaniyat tak ja pahoncheji ❤️🙌🏼 Thank you @anubhavsinhaa for yet another precious experience. Keep telling stories. It’s a picture wrap!!!" Several fans headed to the comments section of the image and extended their best wishes to the actor for her upcoming release."

Rajkummar Rao began filming for the project in November, and headed to social media as the film wrapped up its shoot. He too shared a picture with the director, whom he called a 'genius filmmaker' and mentioned it was 'amazing' to work with him. In the picture, he was seen hugging Anubhav Sinha, as the two smiled from ear to ear. He also expressed his love to the director and wrote, "And it’s a Wrap #BHEED. Can’t express in words how amazing I felt working with you my dearest @anubhavsinhaa sir. You’re a gem of a person and a genius filmmaker. इस “भीड़” में एक बहुत अच्छे दोस्त मिल गए मुझे। I love you sir. ❤️"

Bheed is touted to be a social drama and will see Pednekar and Rajkummar Rao in lead roles. The duo will also share the screen in Badhaai Do. Bheed will be produced by Sinha in collaboration with Bhushan Kumar, who also backed the filmmaker's previous venture. Pednekar has several films in the pipeline, and apart from these two will also be seen in Mr Lele and Raksha Bandan. Rao on the other hand is gearing up for his roles in Monica O My Darling and Hit: The First Casedagger.

READ | Dia Mirza wishes she had her late father's possessions, says 'he was my hero'
READ | Dia Mirza on her birthday pledges 40 lakhs to kin of forest warriors who died of COVID
READ | Dia Mirza shares pic from 40th bday celebrations with husband; pens gratitude note for all

WE RECOMMEND
From Ranbir Kapoor to Dia Mirza, this is how Bollywood celebrated Christmas | See pics
Dia Mirza shares UNSEEN pic of son Avyaan as her 'little mowgli' turns 4 months old
Rajkummar Rao all praise for director Anubhav Sinha after wrapping up 'Bheed' shooting
Dia Mirza on her birthday pledges 40 lakhs to kin of forest warriors who died of COVID
Kareena Kapoor's mood swings fixer is winning hearts from Dia Mirza, Saba; Watch who he is
Listen to the latest songs, only on JioSaavn.com