Bollywood actor Ayushmann Khurrana and two others from the Hindi film industry have been called for questioning by the Thane police in connection with a cheating complaint filed against them by a director, said an official Monday.

Bollywood actor Ayushmann Khurrana and two others from the Hindi film industry have been called for questioning by the Thane police in connection with a cheating complaint filed against them by a director, said an official Monday.

A letter of memorandum was sent to Khurrana, director Amar Kaushik and producer Dinesh Vijan, both of Maddock Films, a leading production house, Sunday by the Kashimira police station after receiving the complaint, the official said.

The complaint against the trio has been filed by 39- year-old film director Kamalkant Nanak Chandra, a resident of Mira Road, a suburb of Mumbai located in Thane district, he said. 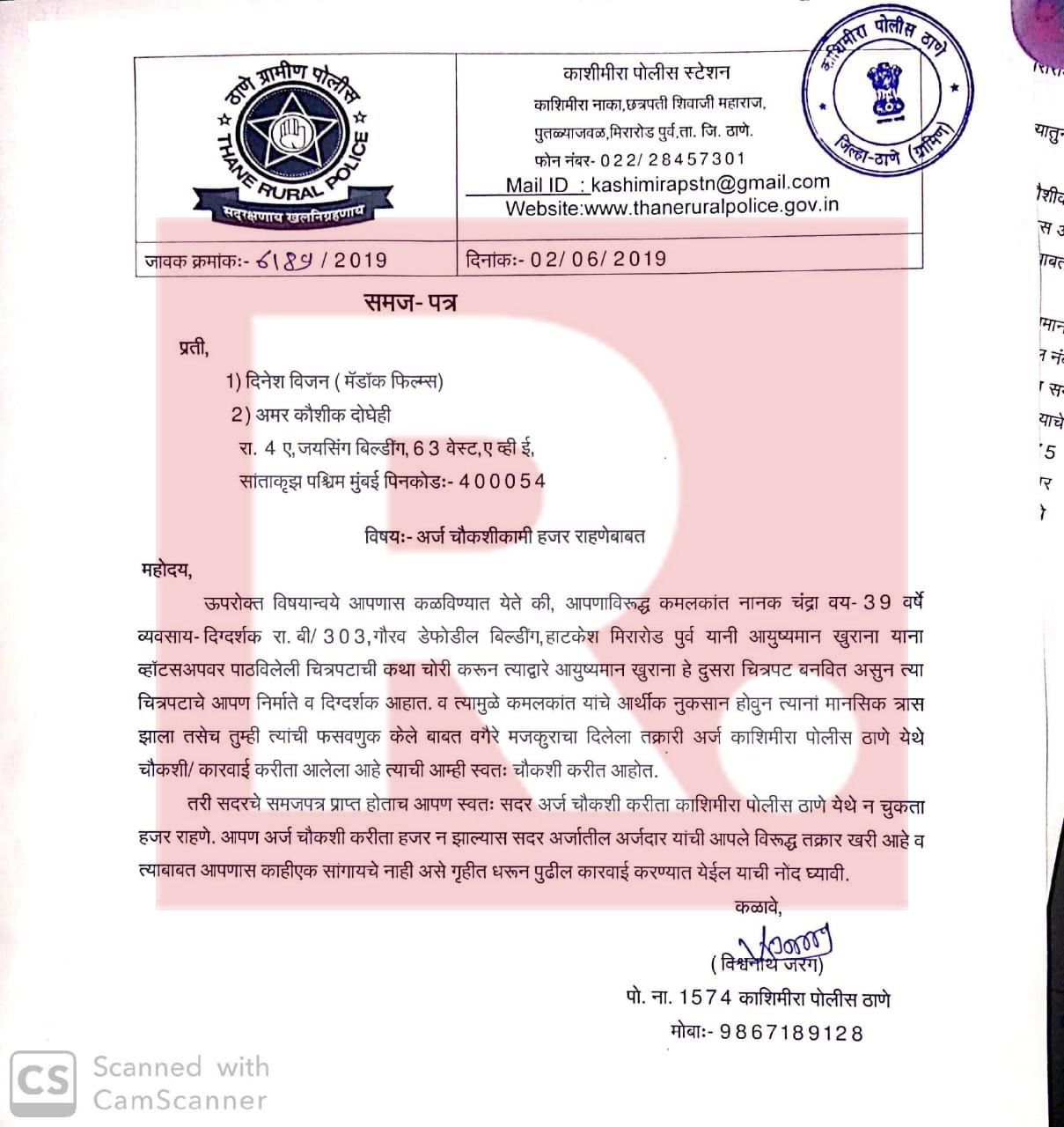 A statement from Ayushmann’s legal team was released that said - "What has been communicated to you is a malafide distortion of actual facts specially with regard to the proceedings of 09th April 2019. In fact, Mr. Chandra also moved the Bombay High court in vacation (May 29) in this regard and was not granted any relief. In any event as the matter is sub-judice and since the next date of hearing is June 10, 2019 we are are not commenting any further. In any event our script is original and we will show that to the court when the matter comes up."

The episode dates back to the time when Chandra was working on the script of a film which was to be directed by him, the official said, quoting from the complaint.

According to the complainant, he had sent the script of the story to Khurrana on his WhatsApp number.

The `Vicky Donor' actor allegedly passed on that script to Kaushik and Vijan and they started making a movie based on it, Chandra claimed. This caused financial loss and mental anguish to Chandra, who felt cheated by the trio, the official said, citing the complaint.

Acting on the complaint, he said, the police have called Khurrana and the other two Bollywood personalities for questioning and to know their point of view in the matter. "We want to know their side over the complaint. Hence, we have sent them a letter, asking them to remain present before the police as early as possible," the official said.

"If the actor and the two others fail to appear before the police, it will be construed that they dont want to say anything in connection with the complaint and necessary action will be initiated, he said.

Earlier, Bala director Amar had said in one of the interviews: “I have no idea about all this. We have been writing the story since 4-5 months. The two characters might be similar, I don’t know. Neither I know his script nor I have ever met him. There can be many stories about a bald man. I have been writing my story since day one. I don’t know anything else. As far as the case is concerned, the producers will look into it.”