Babil Khan Remembers Dad Irrfan Khan On His Death Anniversary: 'I'm Not Ready To Move On' 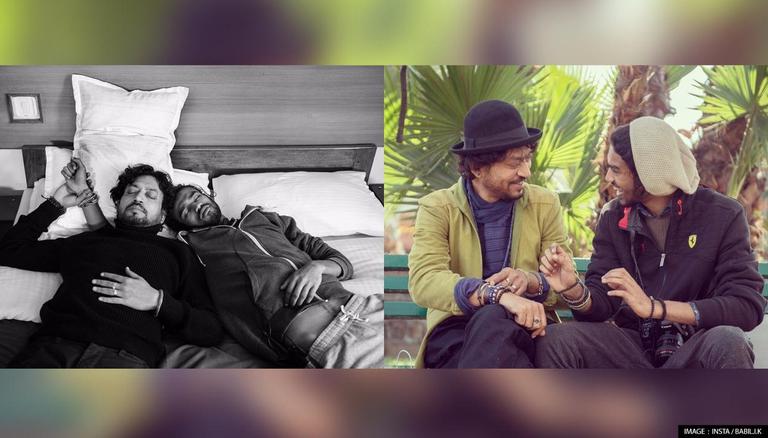 
After almost two-year-long battle against cancer, actor Irrfan Khan breathed his last on April 29, 2020, in Kokilaben Dhirubhai Ambani Hospital, Mumbai. The actor was diagnosed with neuroendocrine cancer in 2018 and was under treatment. The news of Irrfan Khan's demise came as a shock to the entire film industry and also to his fans. He was survived by his wife, Sutapa Sikdar, and their two sons - Babil and Ayaan. On his second death anniversary, Babil Khan recently penned a heartfelt note for his late father and also shared his unseen picture.

Babil Khan often pens special notes for the late father Irrfan Khan mentioning how he misses him. On Irrfan Khan's second death anniversary, The Railway Men actor took to his Instagram handle to share an unseen photo of his parents. Irrfan Khan could be seen wearing a printed shirt, black jacket and red pants in the picture, while Sutapa Sikdar sat on his side.

In the caption, Babil penned an emotional note describing how he misses his father's smell and the sensations on his fingertips. He wrote, "Dear baba, I’m trying to remember that perfume you wore, when we travelled north to watch lights dance in Norway. I remember exactly, the feeling of your smell, but I can’t remember the materialism of it. I remember the sensation on my fingertips when you spread my palms to tell my fortunes but it frightens me to forget your playful pinch on my nostrils."

He added, "I have begged, and I have cried to the heavens, to let not my body forget yet; for my soul is not ready to forfeit." Further, Babil added how he is not ready to move on and wrote, "I am alright with the idea that possibly I will never be, we were never governed by logic. You and I, singular and cosmic. Everything is, and yet it is not; You’re a perfect teardrop in my asylum. I was mindful and yet I forgot, my intonations of violence. You still breathe, in my thoughts; and our institutions of madness. I miss that, what I fought; your explorations of silence. A creation of yours, Babil." Kay Kay Menon and several other celebrities sent love via the comment section. Babil Khan originally wrote the piece for Hindustan Times.