'Bhoot Police' has arrived on the OTT platform Disney+ Hotstar on September 10, 2021. Here is how netizens reacted to the horror-comedy film. 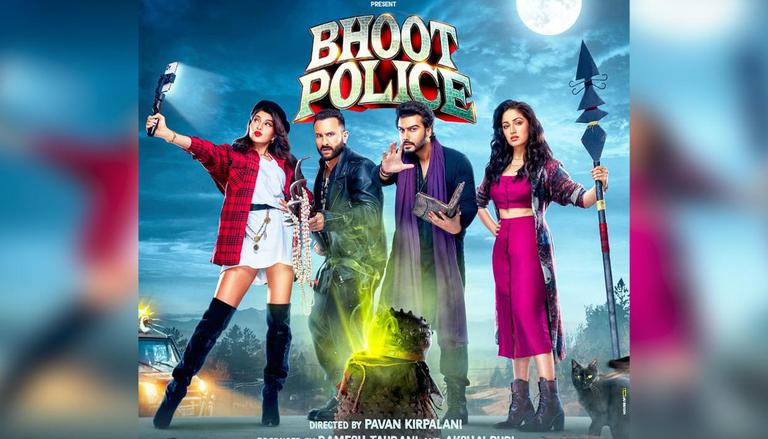 
The much-anticipated horror comedy film Bhoot Police recently debuted on the OTT platform Disney+ Hotstar. The film was preponed from its official release date and came out a few days early. While fans of the film are making it trend on Twitter, the social media platform is also filled with its reviews. Here is how viewers reacted to the Saif Ali Khan, Arjun Kapoor, Yami Gautam and Jacqueline Fernandez starrer Bhoot Police.

Bhoot Police arrived on the OTT giant today, September 10, 2021. The film revolves around ghost hunter brothers Chiraunji and Vibhuti and their quest to capture a demon haunting a tea estate in Himachal. It currently has an IMDb rating of 7 on 10. While some viewers were amazed to watch the film, others were seemingly upset with the actors and the script.

A Twitter user sarcastically praised Saif Ali Khan for the film and compared the horror-comedy with his 2014's Humshakals. The user wrote, "If we were to compare Saif's hamshakals with bhoot police I'd go with bhoot police." Another viewer compared the film with the Ajay Devgn starrer Bhuj: The Pride Of India. The user mentioned how the horror-comedy was a contender of Bhuj and called it directionless. A user also called Bhoot Police a blend of Stree and Scooby-Doo that failed to tickle any funny bones.

#BhootPolice on #DisneyPlusHotstar If you thought Bhuj The Pride of India was directionless, script-less, tacky and the worst movie of the year, meet its strongest contender. Even the ever dependable Saif Ali Khan hams his way through this mess. Totally avoidable!

#BhootPolice Scooby-Doo meets Stree kinda concept but doesn't evoke ur funny bones, a few chuckles here & there thanks to Saif ! 2 leading ladies who seem bland & dumb with a sidekick Arjun ! Borefest which cud have been way better & more Funny !

A Twitter user praised the actors for their work in the film but was slightly disappointed with the script. The user wrote, "Bhoot Police Now Streaming It was fun watching #BhootPolice. Writing would have been better but actors really pulled up the show & made this film, love to watch." The film also saw budding romance between the characters. A fan of Saif and Jacqueline's characters wrote, "this movie is really Amazing the chemistry between Saif and Jacqueline gonna rock ..."

READ | 'Bhoot Police' duo Arjun Kapoor, Saif Ali Khan open up on how they get through career lows

It was fun watching #BhootPolice
Writting would have been more better but actors really pulled up the show & made this film, love to watch 🌟🌟🌟 💫#BhootPoliceReview pic.twitter.com/EPRjCFQ6Nx

this movie is really Amazing the chemistry between Saif and Jacqueline gonna rock ... #BhootPolice pic.twitter.com/2D3CelJRSi

A Rajpal Yadav fan was also upset with the film for the actor's role. The fan wrote, "Why have the makers stopped giving well-fetched roles to a stupendous actor like #RajpalYadav? It's absolutely upsetting to see him in a blink and miss appearance in #BhootPolice." The user further urged filmmakers to respect the actor's talent.

Why have the makers stopped giving well-fetched roles to a stupendous actor like #RajpalYadav? It's absolutely upsetting to see him in a blink and miss appearance in #BhootPolice. Please write better for him. He deserves so much more.