The much-awaited Arjun Kapoor and Saif Ali Khan starrer 'Bhoot Police' will witness a preponed release on September 10, 2021. It is helmed by Pawan Kripalani. 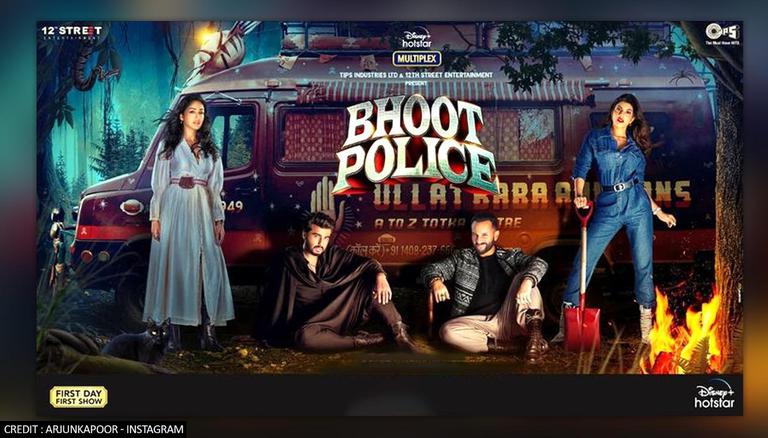 
Arjun Kapoor and Saif Ali Khan starrer horror-comedy Bhoot Police is one of the most awaited Bollywood movies of 2021. In a recent update for all the fans, the makers have preponed the movie's premiere date, which was originally planned for September 17. The Pavan Kirpalani directorial is now set to release on the streaming service, Disney+ Hotstar on September 10. The makers and cast took to their respective social media handles on Tuesday, September 7 to announce the news.

'Bhoot Police' to release on September 10

Taking to his social media handle today, Half Girlfriend actor Arjun Kapoor uploaded a poster of the movie and wrote, "Good news for your weekend! Bad news for Bhoots. #BhootPolice is releasing 7 days early! Streaming from 10th September only on @disneyplushotstarvip. Stay tuned!." It was also shared by other team members.

More about the upcoming horror comedy

Bhoot Police is helmed by Pavan Kirpalani, who has directed films like Ragini MMS and Phobia while Ramesh Taurani and Akshai Puri are bankrolling the project. The film stars Saif Ali Khan, Arjun Kapoor, Jacqueline Fernandez, Yami Gautam and Javed Jaffrey in pivotal roles. The movie's official trailer has already struck curiosity in fan's minds as they witness Saif and Arjun catching ghosts in their special van. While Saif essays the role of Vibhooti, whose greed keeps him in the ghostbusting business,  Chiraunji (played by Arjun Kapoor) on the other hand, takes his job more seriously.

The movie went on floors last year in November as they shot in Himachal Pradesh and finished shooting in February 2021. The makers had planned a theatrical release for the film, however, owing to the COVID-19 pandemic it will release digitally on Disney+ Hotstar.

On the work front, Saif will be seen reuniting with Hrithik Roshan after 19 years since Na Tum Jaano Na Hum in the Bollywood adaptation of Vikram Vedha. The original 2017 flick was directed by Pushkar-Gayatri, who will also helm its Hindi remake. The movie will also feature Radhika Apte in a significant role and is set for a 2022 release.

Meanwhile, Arjun who was recently seen in Sardar ka Grandson has Mohit Suri's Ek Villain Returns in his pipeline. The film is a sequel to the 2014 film, Ek Villain and will also see John Abraham, Disha Patani and Tara Sutaria in lead roles.