'Bhuj: The Pride Of India' Trailer Out; Netizens Demand Theatrical Release Instead Of OTT

'Bhuj The Pride of India' gets a trailer release and fans across the country are excited to watch the patriotic movie in theatres. Read more on fans' reactions. 
One of the highly awaited movies of the year, Ajay Devgn's Bhuj The Pride of India has finally released its trailer. After hyping up the audience with the first looks of the cast and movie, fans got a brief look into the action-packed sequences and the characters of the star-studded cast of the film. After the release of the trailer, fans had a serious demand from the makers of the movie.

Directed by Abhishek Dudhaiya, the movie dropped its first trailer on Youtube which has garnered over a million views within hours of its release. In the trailer filled with action, drama and dance sequences, the audience got to witness some of the most intense looks into the scenes depicting Pakistan's raid on the Bhuj airbase which was still operational during the war.

Bhuj The Pride of India trailer showed a promising depiction of courage and bravery by the Indian fighters while also narrating the stories of various characters proving their loyalty towards the country. With powerful dialogues, the trailer was played in the backdrop of a patriotic track. The cinematography of the movie is done by Aseem Bajaj and GBCT.

Netizens react to the Bhuj trailer

Followed by its trailer release, the movie received a plethora of positive feedback for its music, dialogues and cinematography. Many fans commended the intense dialogues delivered by the characters in the trailer which were enough to provide a gist of their role in the film. The compliments did not stop there, as fans flooded Twitter to share their feedback on the trailer with one fan tweeting about being excited about the movie.

This need to get a theatrical release. These brave soldiers, nationalism of veer Rabari & the courage of the people of Madhapur gaon should be know to every Indian.
Saala history me kbhi ye sb padhaya hi nhi gaya

What scares me is the piracy. Such movie deserves huge collection 👏

Pls pls pls release in theaters. This is insanely mind-blowing

After a long time finally a Good Movie Arriving.
All Characters of this movie's R Fabulous.. specially @ajaydevgn's Intensity And @duttsanjay's are Outstanding.This movie Going to be blockbuster of 2021..if #BhujThePrideOfIndia is to be Release At Theatre it All records break Dn 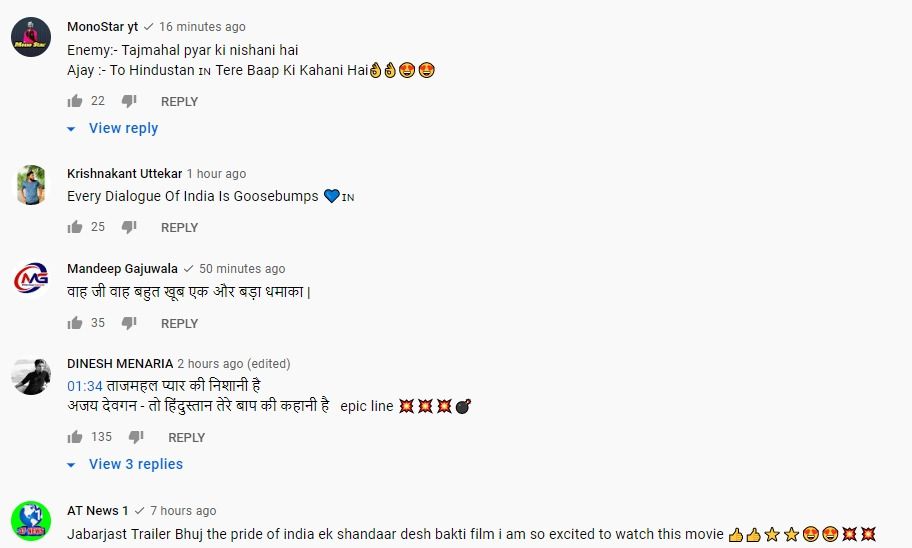 Several fans were quick to voice their opinions on the movie deserving a theatrical release. Apart from the technical aspects of the movie, fans have also lauded the performances of the star-studded cast. Candian actress Nora Fatehi stood out the most to the fans as they flooded social media with her hashtags after being impressed by her Hindi dialogues delivery. Netizens are excited to witness Nora's new avatar in the forthcoming movie.

#AjayDevgn #SonakshiSinha and #SanjayDutt’s first looks came last year. Now new looks of them and other principal star cast will come in the 2nd week of July – including #NoraFatehi #SharadKelkar #PranithaSubhash and #AmmyVirk and then followed by a one-minute teaser. #Bhuj

#AjayDevgn #SonakshiSinha and #SanjayDutt’s first looks came last year. Now new looks of them and other principal star cast will come in the 2nd week of July – including #NoraFatehi #SharadKelkar #PranithaSubhash and #AmmyVirk and then followed by a one-minute teaser. #Bhuj