Actor Bhumi Pednekar recently took to her Instagram handle and posted a video clip in which she illustrated herself showing how much she loves makeup.


It is a well-known fact that Bhumi Pednekar loves makeup as she often shares glimpses of herself applying makeup on social media. A while ago, she posted a tutorial video clip for her fans teaching them how to apply makeup. Recently, she dropped yet another makeup tutorial.

Bhumi Pednekar recently took to her Instagram handle and shared this video clip of herself with all her fans. In the video, she can be seen showcasing a step-by-step process of applying makeup. She began by applying moisturiser to her face and then applied concealer under the eyes, on her nose as well as her chin. She then shaped her eyebrows with an eyebrow pencil. She applied a bit of pink blush to her cheeks and evenly spread it with a large makeup brush. Bhumi Pednekar then applied pink coloured eye shadow with another brush and then evenly applied foundation with the help of a brush. In the end, she showcased her complete makeup look and pouted for the camera. She could be seen wearing a wide v-neck white top beautifully flaunting her golden pendant. She even added a pair of simple and elegant earrings with her hair partially tied at the back.

READ | Bhumi Pednekar upset with 'brutality towards planet', says 'this is our only home'

Many fans took Bhumi Pednekar’s latest Instagram video and poured in numerous heart symbols and heart-eyed emojis in the comments to express how much they loved her video. Many of the fans also stated that she did her makeup with “perfection” while others mentioned how she does not need makeup as they love her natural beauty. Some of the fans also praised her by stating how pretty she looked in her video. Take a look at some of the fans’ reaction to Bhumi Pednekar’s Instagram post and see how her fans showered love and praises on her. 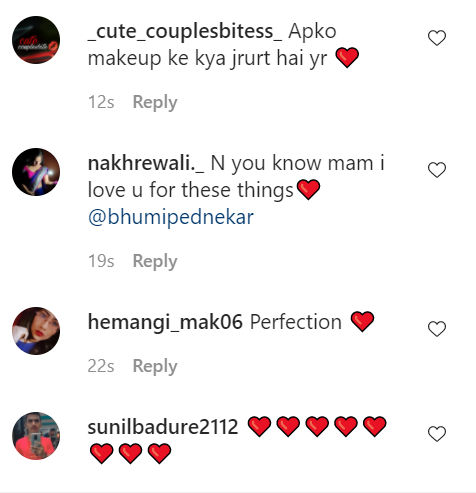 READ | Bhumi Pednekar is 'waiting' to come out of isolation; Shares glimpse of quarantine life