Bipasha Basu And Karan Singh Grover Apply Colours On Each Other; Wish Fans A "Happy Holi"

Bipasha Basu wished fans a happy Holi as she shared a video of herself playing with colours alongside her husband Karan Singh Grover. Read further to know.

Bipasha Basu and Karan Singh Grover shared a video of themselves celebrating Holi in the most romantic way possible. Fans of the actors have loved the chemistry they share with each other and thus the video was labelled adorable by fans. The video had a classic song playing in the background as Bipasha Basu and Karan Singh Grover applied colours to each other as they enjoyed the festival.

Bipasha Basu shared the video with fans on social media who seemed to absolutely love it. The two wore all-white attires and were seen seated in their home as they applied colours to each other’s faces. The couple took a sunkissed video of themselves as they greeted each other with colours. The playful video seemed to impress fans who loved watching the couple play Holi. The video shared by them went on to gain over 5 lakh views within a couple of hours along with several comments from fans and well-wishers.

Sharing the video online, Bipasha Basu wished fans a happy Holi with a heart emoji and a number of fans too responded to the reel, wishing her back. Fans simply praised the chemistry between Bipasha Basu and Karan Singh Grover and left several emojis praising the couple for their Holi wish. On the work front, Bipasha Basu seemed extremely executed for her husband Karan Singh Grover, who began the second season of Qubool Hai. The actor shared the poster of the series on her timeline and wished all the best to Karan as he took on the second season for the popular show. 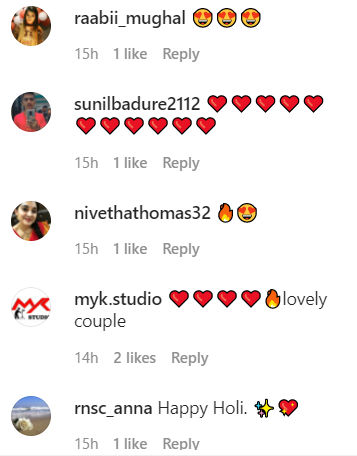 Bipasha Basu, on the other hand, has no new projects lined up. However, she was seen in an advertisement opposite Ranbir Kapoor a while back. The actor shared the advertisement on her timeline and fans seemed to love her cameo appearance in the short and quirky ad. Besides that, the actor has been giving major travel goals to fans as she shares a number of pictures from her travel diaries on her social media handles. Bipasha has been sharing a number of Reels with Karan from her vacation which has been loved by fans.