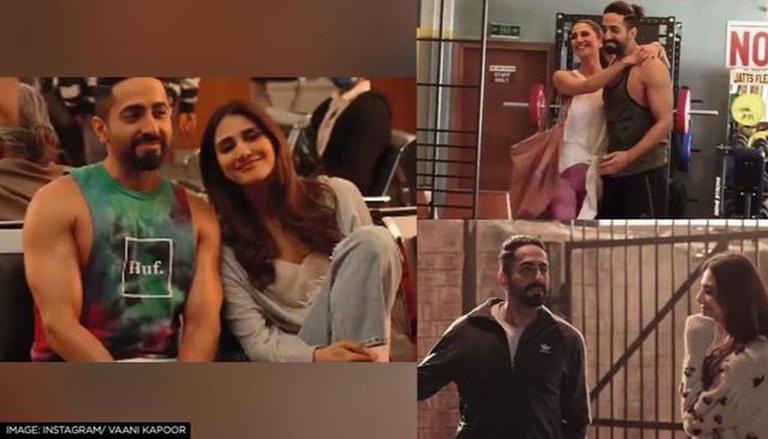 
Ahead of Chandigarh Kare Aashiqui's release, Vaani Kapoor shared a montage BTS video from the sets, which perfectly encapsulates the cast and crew's fun-filled filming journey. The clip includes snippets of the leading duo and director Abhishek Kapoor shedding light on social issues highlighted through the film while also revealing how the project's title was conceived by Ayushmann Khurrana.

Taking to her Instagram handle on Sunday, November 28, Vaani uploaded the one and a half minute video, which begins with Ayushmann describing why the film is 'special' for him. He said that it "deals with taboo subjects and subjects which we are a little scared to talk about". The director revealed that Ayushmaan suggested the film's title, which also came from the actor's love for his hometown. "Chandigarh was not explored that much... and I could just give that authentic flavour because I've been born and brought up in Chandigarh". He could then be seen expressing the 'surreal' moment while shooting at one of the coffee houses in his vicinity.

Producer Bhushan Kumar also mentioned that the film's fresh pairing, refreshing tracks, concept and message will be a bonanza for everyone. Lastly, Vaani described it as a "light-hearted, happy film about these two people. It's fun, it has a great message." Abhishek believes that the film will 'open another chapter', making room for the much-needed liberation.

The film's trailer showcases the quirky love story of gym trainer Manu and Zumba instructor Maanvi Brar.  It opens up with the duo crossing paths in a gym, which has been rented out equally to them, with Manu's romance awakening after he witnesses Kapoor's Zumba sessions. Chaos ensues when Maanvi is revealed to be a trans woman. Produced by T-Series in collaboration with Guy In The Sky Pictures, it will release next month.