Chandrayaan-2: Akshay Kumar Sends 'more Power' To The 'rocket Women' And ISRO Team Ahead Of The Second Lunar mission

Ahead of Chandrayaan-2, Akshay Kumar extends best wishes to ISRO and the women behind the much-anticipated space mission.

The Indian Space Research Organisation (ISRO) is going to launch one of the most complex missions- 'Chandrayaan-2' (second lunar mission) from Sriharikota, Andhra Pradesh at 2:51 am (Indian Standard Time) on July 15. Ahead of the same, Bollywood actor Akshay Kumar took to Twitter and extended best wishes to ISRO and the women behind the much-anticipated space mission.

Sharing a picture of the spacecraft, the actor in a recent Tweet wrote, "India’s second space mission to the moon, #Chandrayaan2 is led by two women scientists of @isro , a first in India’s history! Sending my best to the rocket women and #ISRO team, more power to you!"

India’s second space mission to the moon, #Chandrayaan2 is led by two women scientists of @isro , a first in India’s history! Sending my best to the rocket women and #ISRO team, more power to you! pic.twitter.com/AX6e8335YK

READ: ISRO'S Chandrayaan-2 Mission Set For Launch: Here's What It Aims To Do

'Chandrayaan-2' is a woman-led project with around 30 percent of female members in the team. This is for the first time in history, a space mission is directed by a woman in ISRO. The leading ladies of the second lunar mission are Muthyya Vanitha and Ritu Karidhal who heading and directing the project respectively.

Meanwhile, Akshay who is all set to star in 'Mission Mangal' based on the real-life story of the ISRO's Mars Orbiter Mission, previously had an interaction with the organization on social media after he unveiled the teaser of his upcoming venture.

As he shared the teaser on Instagram days back, ISRO commented on the post reciprocating the thrill.

Akshay had further replied to the comment wishing all the best for the impending space mission. 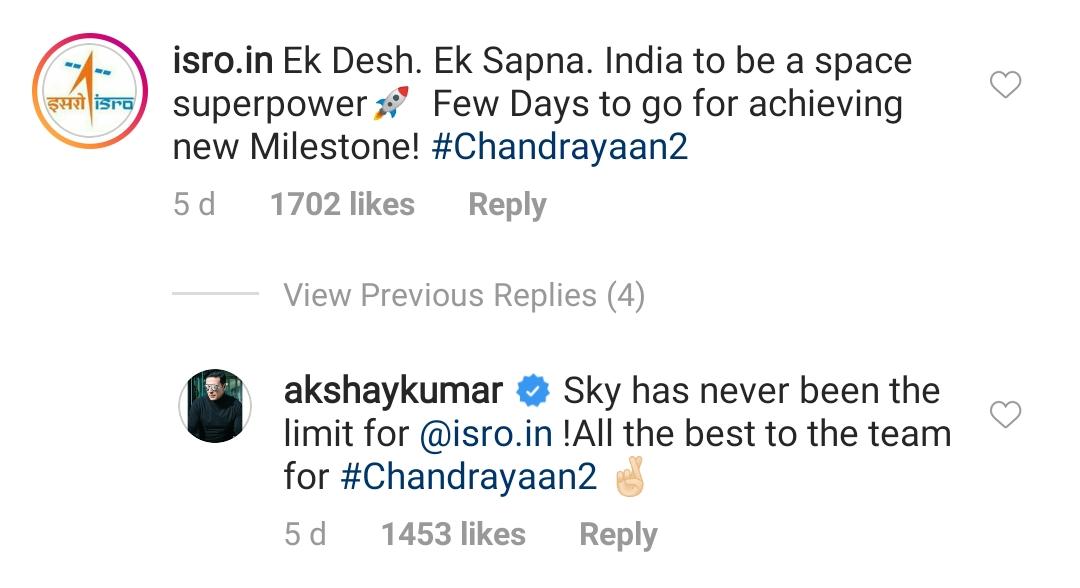 'Chandrayaan-2' aims to go where no country has ever gone before, the Moon’s south pole region. The main aim of this effort is to improve the understanding of the Moon, and doing so, according to ISRO, will benefit India and humanity as a whole. These insights and experiences aimed at a paradigm shift in how lunar expeditions will be approached for years to come — propelling further voyages into the farthest frontiers.