'Chhapaak' Trailer Gets Thumbs Up From Alia Bhatt As She Calls It 'very Moving;' See Pic

'Chhapaak' trailer was shared by Alia Bhatt on her Instagram story. The Raazi actor added a sweet message with the story for Deepika Padukone and Meghna Gulzar.

Deepika Padukone also responded to this sweet gesture by Alia Bhatt. She called Alia the nickname ‘Aaloo B’ and thanked her for sharing the trailer of Chhapaak. Check out the stories of Alia Bhatt and Deepika Padukone here. 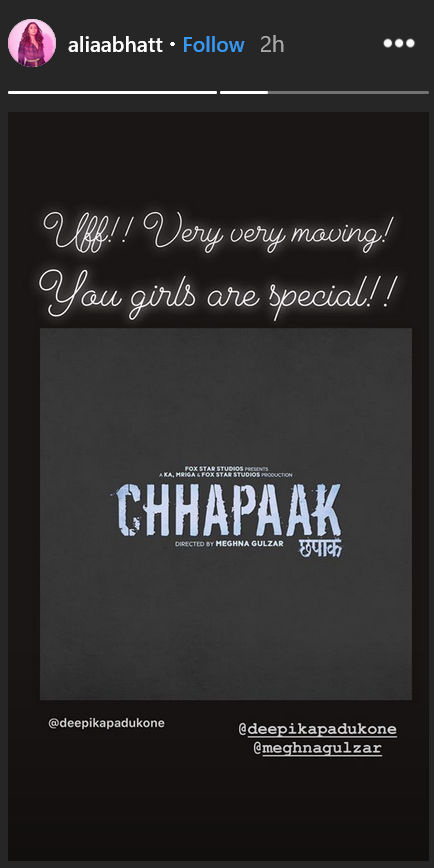 Also read | Chhapaak: Meghna Gulzar Clarifies That It Is Not A Woman-centric Film The trailer of Chhapaak has been receiving a great response online. At the time of writing, the Chhapaak trailer was trending on YouTube and cemented its No.1 spot on the list. The Chhapaak trailer starts with people protesting about the issue and also mentions the Nirbhaya rape case as an important aspect of the protests. As the trailer progresses, Deepika Padukone as her lead character Malti can be seen suffering the consequences of the acid attack. Deepika Padukone has transformed into various life stages of Malti for this film and this evident in the trailer as well. Check out the Chhapaak trailer here.