'Fauji' director Raj K Kapoor (Colonel) passed away at the age of 87.

Colonel Raj Kumar Kapoor, the director who brought in the spotlight on Shah Rukh Khan with his TV serial 'Fauji' on Doordarshan, passed away at the age of 87 on April 11, as informed by a family member.

A Facebook post from Kapoor’s account but written by a family member read: “This is to inform you that our beloved dad, Raj Kumar Kapoor, has left his earthly body to go on a brand new adventure.” 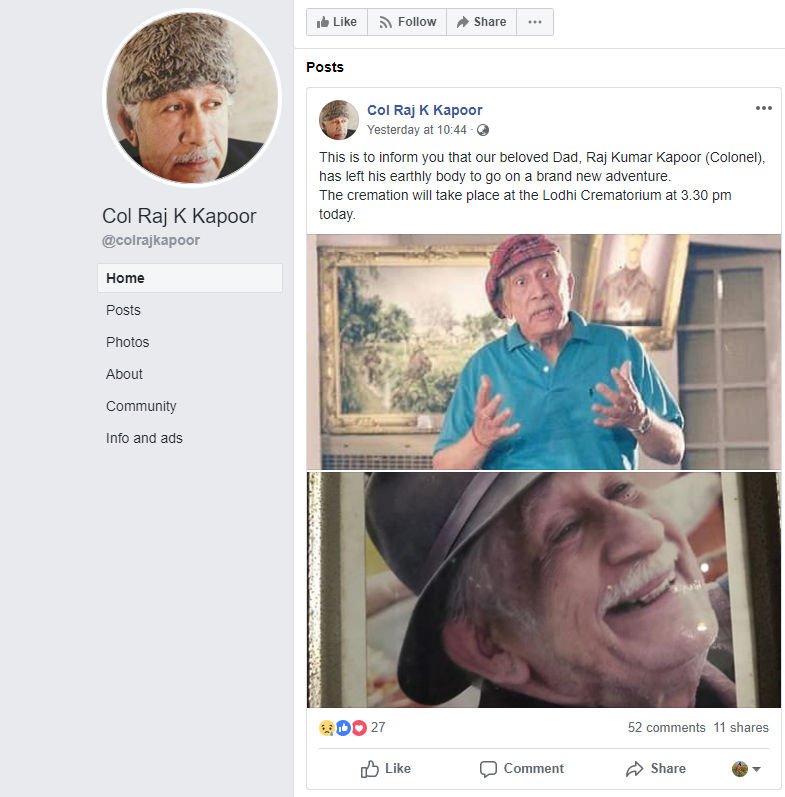 The creator of FAUJI serial on Doordarshan, Raj Kumar Kapoor (Colonel), has left his earthly body to go on a brand new adventure. The cremation will take place at the Lodhi Road Crematorium at 3.30 pm today. Shraddhanjali. pic.twitter.com/qc1rxLUv7h

For those unaware, Raj Kapoor wrote an essay in Samar Khan’s book titled 'SRK - 25 Years of a Life'.

“I’ve been an actor, I’ve fought three wars, but all that anybody seems to remember is that I launched Shah Rukh 20 years ago. It amuses me to think that I’m given credit for something I played no part in. Shah Rukh’s parents made him, I didn’t. I didn’t make a superstar; I simply chose the right man for a job I had. What happened before or after that in his life has nothing to do with me,” he wrote.

PEOPLE HAVE PLEDGED SO FAR
Spotify just released a 'Game Of Thrones: The End Is Coming' playlist and the makers say it is 'riddled with spoilers'. Here's the list
Sandip Ssingh says that Vivek Oberoi played his actor, director, spotboy and a writer for 'PM Narendra Modi' biopic. Read his full statement
Saif Ali Khan's association with Dabboo Ratnani is courtesy THIS celebrity
Tiger Shroff to return as Bablu in 'Heropanti 2' after 'Baaghi 3'?
Hrithik Roshan reveals why 'Super 30' was much 'easier' than 'War'
As Dabboo Ratnani reveals his Calender 2020, here's a look at his astonishing NET WORTH
Saif Ali Khan and Rani Mukerji starrer 'Bunty Aur Babli 2' to release on THIS date
DO NOT MISS
JDU'S AJAY ALOK SLAMS PRASHANT
MHA SOURCES ON DEBBIE ABRAHAMS
SANDERS CITES INDIA IN A LIST
PAWAR GIVES NEW TWIST TO ELGAR CASE
CHROME NO INTERNET DINOSAUR GAME
TRUMP CAMPAIGN MANAGER'S WRONG POST