'Come Back To Bed': Urvashi Rautela Poses THIS Question To Her Fans


Hate Story 4 star Urvashi Rautela has a special question for her fans in her latest Instagram post. The actor has always actively engaged with her fans and, now, seeks their opinion on an important matter. She stunned fans with a brand new makeup look but could not decide what to name it.

Rautela showed off her posing skills in a brand new Instagram post. With her hair tied up in a bun and donning a bathrobe, she wore some Cartier jewellery and showed off her makeup like the centre of attention. In the new look, Urvashi flaunted her bold pink eye makeup shaped like a wing and a glossy lip to give a glam yet dewy look.  That's when the actor got stuck and sought help from her fans as she asked, "What do you think this look should be called?".

The picture posted on April 9, 2021, received many suggestions from fans, pinned by the actor in the comment section. One fan claimed that "Record Breaker" would be a great name for Urvashi. Another called her "the eighth wonder of the world" and a "beauty queen".

Other fans too showered their love on Urvashi Rautela by dropping hearts and fire emojis in the comment section. One fan said that the new makeup look "Amazing" and another called it "Great!". The picture received more than 400,000 likes in a few hours.

READ | Does Urvashi Rautela have any marriage plans? Actress replies to fan's query 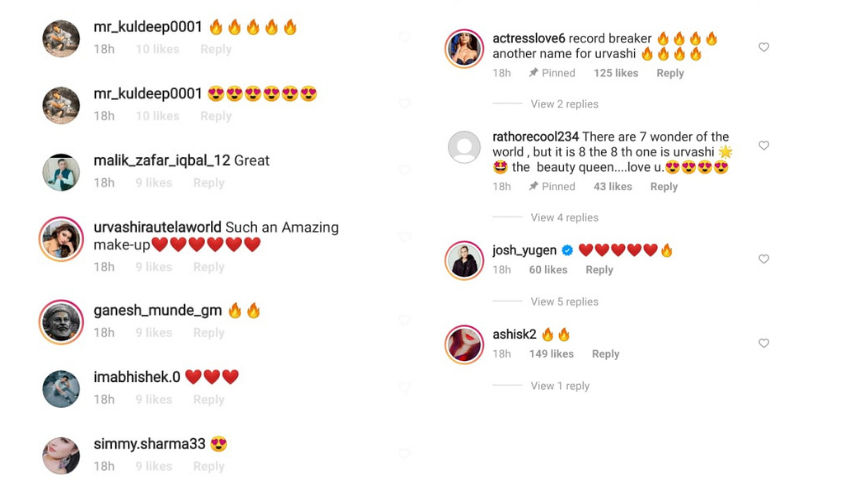 In 2020, Urvashi was seen in Virgin Bhanupriya, in the lead role as Bhanupriya Awasthi. The comedy film helmed by Ajay Lohan and was released on Zee5. The movie was supposed to release in theatres but was postponed, like many other movies, and had to be shown on an OTT platform.

In 2021, Urvashi Rautela will mark her debut in the Tollywood industry with Black Rose.  The movie will be helmed by Mohan Bhardwaj and bankrolled by Srinivasaa Silver Screen. Urvashi unveiled the first look of Black Rose on September 23, 2020, giving a hint at what the character's traits would be like. She compared the character to that of a rare black rose who is "deep, dark and enticing".