A day after the 67th National Film Awards were announced in New Delhi, the Congress in Chhattisgarh attacked the national award winners on Tuesday morning

A day after the 67th National Film Awards were announced in New Delhi, the Congress unit in Chhattisgarh immediately attacked the winners on Tuesday. The grand old party's Chhattisgarh unit took to Twitter and shared a picture of a wooden horse, taking a dig at award winners. However, the Twitter post has been taken deleted for unknown reasons.  Tweeting a picture of a wooden horse, the Chhattisgarh Congress captioned it as 'Toolkit for National Award'. The deleted tweet's screenshot is below.

It is unclear what the attack means. The reference to Toolkit is clearly to the document and controversy that Greta Thunberg had unwittingly brought to light when she had waded into the farmers' protest row, at which point numerous Indian celebrities, led by Kangana Ranaut who was awarded with another National Film Award on Monday, replied in kind. Some of these celebrities who are as such considered unimpeachable, such as Sachin Tendulkar and Lata Mangeshkar, were attacked by various political parties led by the Congress for backing the MEA's view that the matter was an issue of India and didn't require foreign meddling. Part of the Chhattisgarh Congress' reference is almost definitely to that. 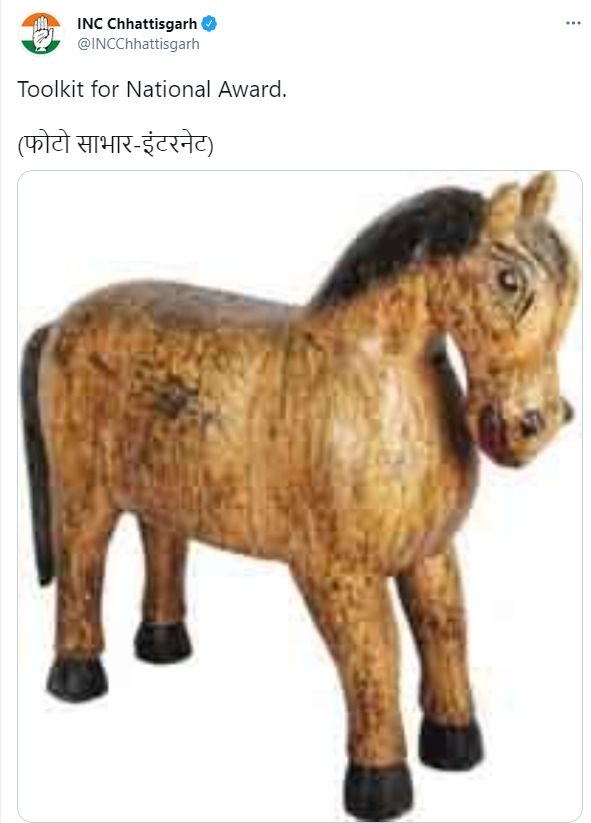 The 67th National Film Awards were announced on Monday. Initially planned for May 2020, the event was delayed due to the ongoing pandemic. Here is the complete list of winners:

Best Actor: Manoj Bajpayee for Bhonsle and Dhanush for Asuran

Best Ethnographic Film: Charan-Atva The Essence of Being a Nomad (Gujarati)