Daisy Shah has been connecting with her fans and spending more time on social media lately. Recently, the actor boldly answered a derogatory remark by a user.

The celebrity fraternity has been quite actively connecting with their fans on social media right now as they are staying at home and have more time to check on their social media updates. However, there are certain pros and cons of being quite active on social media as a celebrity. They get to read all the hate comments; they have been dodging since long now. Recently, it was actor Daisy Shah who was slammed with hate in her comment section, but this time, the actor had an epic reply for the same.

Daisy Shah posted a selfie where she is seen trying out the filters of Instagram as she mentioned in the caption. As soon as the actor posted the picture, one of the user posted a comment where she asked the actor to donate some amount of money and encourage people to do so, instead of just sitting back and doing such things. In response to this, Daisy Shah posted a comment where she mentioned the user and said that she should stop giving such rag advice. The actor further wrote that she is doing her part and definitely doesn't need to prove it to people like the user who are full of volume and no action. 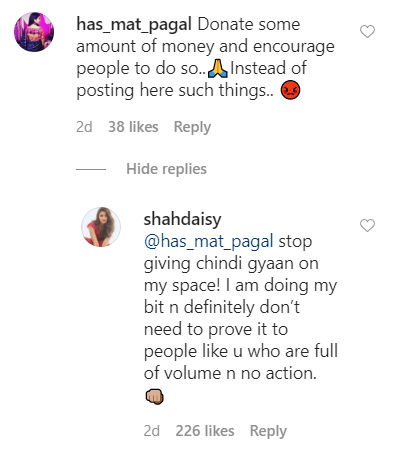 Previously, the Bigg Boss 13 fame Devoleena Banerjee also faced such a situation where she was forced to post a derogatory comment so as to give a reply to the user questioning her activities. During the live session of Devoleena Bhattacharjee and Rashmi Desai, Devoleena commented on Sidharth Shukla and Shehnaaz Gill’s music video and said that there was no chemistry between the duo. Post this live session, a fan made a derogatory comment on one of her posts, which soon caught the actor's attention. In return, Devoleena went on to reply to the comment which didn’t go down well with the netizens. Her sharp reply which stated 'Jaao na kaam karo pati ki seva karo bacche sambhalo', irked netizens who criticised her on Twitter.