Deepika Padukone Tells Ranveer Singh Her Plan To 'save Some Money'

Netizens call Deepika Padukone the 'perfect Sindhi Bahu' after she tells Ranveer Singh her plan to 'save some money'. Fans LOL after reading their interaction.

Trust Deepika Padukone and Ranveer Singh to give their fans a teaser of how the two must function in their daily lives. In their latest PDA on social media, Deepika Padukone's special request and advice on Ranveer's latest picture has left Netizens laughing out loud because it is legit all the couples! 'Padmaavat' actor Ranveer Singh shared picture on his Instagram handle announcing his association with a leading brand of speakers and headphones. Wifey Deepika couldn't resist and gave some advice on 'saving money'. She also said that by putting on the headphones, he will tune her out when she nags him.

Netizens couldn't hold their laughter and one user wrote: "That happens in every household", while other called her 'savage' for writing that. One fan said: "omg Sindhi bahu! So proud" and others wrote: "Biwi ho to aisi". Majority of the fans were laughing out loud and called Deepika 'a typical Indian wife'. Take a look - 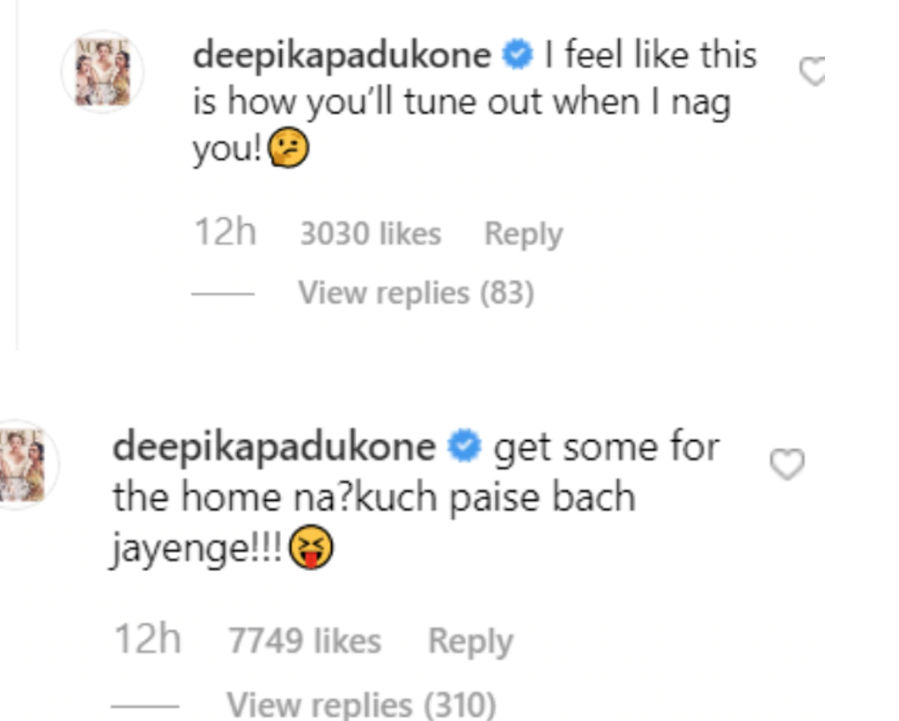 Ranveer Singh and Deepika Padukone (playing Kapil Dev's wife) will next be seen in '83', which is a biopic on cricketer Kapil Dev. The film '83' which is based on India's historical first Cricket World Cup Win against England at the Lord's stadium, will see Ranveer play the role of the then Indian cricket captain Kapil Dev. The sports drama, which will be helmed by Kabir Khan, will chronicle India's win under Kapil Dev's captainship when the Men in Blue defeated West Indies in the final to clinch their first-ever World Cup trophy in 1983.

READ: Here's What Ranveer Singh Wants You To Think About When You Eat Carbs

Ranveer is gearing up for his upcoming sports drama as he is often seen practicing for the same. He is trained for the role by Kapil Dev himself as several pictures and videos of the 'Gully Boy' actor interacting with the legendary cricketer surfaced on the internet. Helmed by Kabir Khan, the movie is slated to release on April 10, 2020.