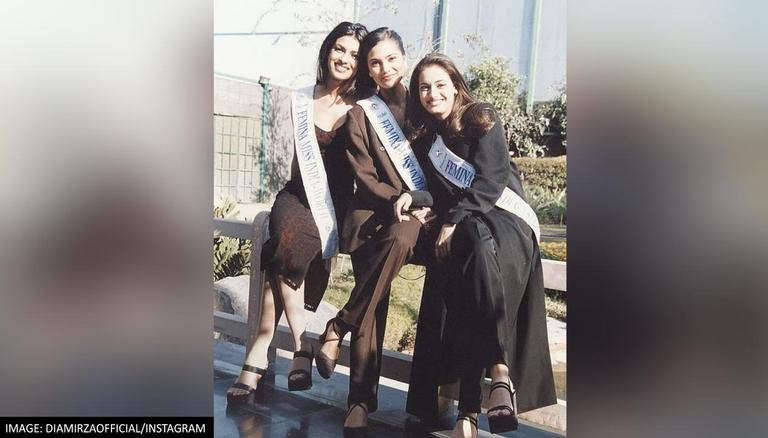 
The year 2000 was a glorious year for us, as all our girls who represented India on an international platform brought laurels to our country by winning the most prestigious crowns in the world. Recently, 'RHTDM' actor Dia Mirza taking to her Instagram handle went down memory lane and shared an unseen throwback picture of her pageant days featuring Lara Dutta and Priyanka Chopra. The picture will surely make you feel nostalgic and bring back memories of the early pageant days.

The picture is approximately 21 years old and it captured the three pageant winners smiling together, dressed in black attires and proudly flaunting their special sashes. The three beauty queens looked gorgeous in the pictures. Sharing the picture, Dia Mirza wrote, “Throwing it back to the year 2000 with @priyankachopra @larabhupathi 🌏 #TBT #ThursdayThrowback”. As soon as the picture surfaced online, fans couldn't resist reacting and they showered love and heartfelt comments on the post. Actress Lara Dutta also reacted to the post, the former Miss Universe wrote -“Three girls with a heart full of dreams and each other to lean on!! @priyankachopra @diamirzaofficial”.

The three beauty queens who brought the crown home in 2000

For those unversed, Lara Dutta had won the title of Miss India in 2000, Priyanka Chopra had emerged as the first runner up, and Dia Mirza was the second runner up. The three beautiful ladies then represented India on an international platform and brought home the most prestigious titles of Miss Universe, Miss World, and Miss Asia Pacific respectively the very same year.

The trio has come a long way since 2000. Priyanka Chopra is now an international star, who juggles the roles of actor, producer and is also a UNICEF Goodwill Ambassador. Lara Dutta Bhupathi on the other hand appears as a judge of Miss India or Miss Diva and simultaneously she also features in movies. Talking about Dia Mirza, she continues her work in Bollywood and she is also appointed as UN Environment's Goodwill Ambassador for India for her contribution to environment conservation.

On the work front, Priyanka Chopra was last seen in The Matrix Resurrections, Dia Mirza was last seen in a web series Call My Agent, Lara Dutta on the other hand was seen in Akshay Kumar starer popular film Bell Bottom.