'Did It The Commando Way': Vidyut Jammwal Confirms Engagement To Designer Nandita Mahtani

Vidyut Jammwal, who was rumoured to be dating designer Nandita Mahtani, has finally made their engagement official on Instagram after keeping fans on their toes 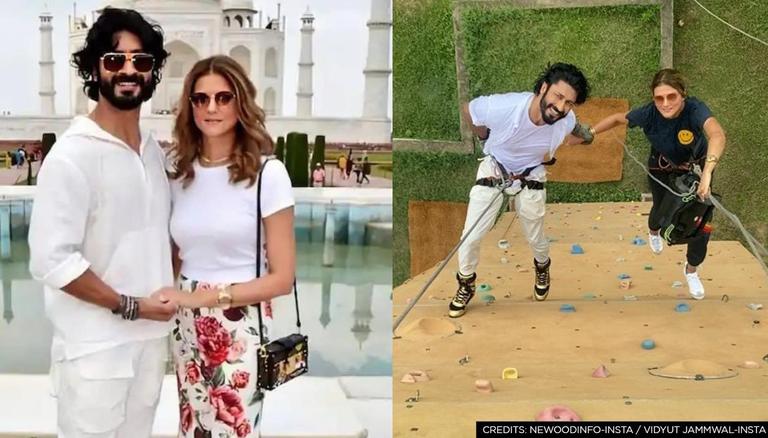 
Actor Vidyut Jammwal, who was rumoured to be dating designer Nandita Mahtani, has finally made his engagement official on Instagram. The actor who is known to perform high-octane action stunts in his films revealed in his post about getting engaged ‘the commando way’. He shared a picture of the two in front of the Taj Mahal in Agra while celebrating the big day. According to various media reports, both were rappelling down a 150-meter high wall at a military camp close to Agra when Vidyut popped the question.

Vidyut and Nandita then headed to the Taj Mahal where the two had posed together for the shutterbugs. In the photos, Nandita was seen flaunting the big rock on her finger. Actor Neha Dhupia who has known Mahtani for a long time had congratulated the couple earlier on her Instagram story. She posted a screenshot of Jammwal and Mehtani posing and holding hands in front of the monument of love. A sparkling ring can be seen on Mahtani’s finger. On the image, Dhupia wrote: “Best news ever … congratulations … @mevidyutjammwal @nanditamahtani".

After Vidyut’s post, Nandita shared the same photos on her Instagram account and expressed that she finally said “yes” to the Khuda Hafiz actor. “Couldn’t keep him hanging any longer…said yes”, Nandita wrote along with the picture. Soon after Nandita’s post, several celebrities from the film fraternity, including Sophie Choudry, Ananya Panday Riddhima Kapoor Sahni, Tanishaa Mukerji, and more were quick to pour in their love for the couple while congratulating them.

According to the reports by Pinkvilla, a source close to the couple mentioned that the duo had been dating for the last two years and have known each other for more than a decade. On the marriage front, it stated that it's definitely on the cards, however, the duo hasn't zeroed down on any particular date or month as of now. They are really content and excited for their future together, the source further revealed.

Meanwhile, on the professional front, Vidyut announced the launch of his production house Action Hero Films. He also announced IB 71 as his first feature as a producer in association with director Sankalp Reddy, who will be helming the film. Currently, the actor is filming for his forthcoming film Khuda Haafiz 2 in Lucknow and areas adjacent to the city.

READ | 'The way I knew him': Vidyut Jammwal to pay tribute to Sidharth Shukla; Know how