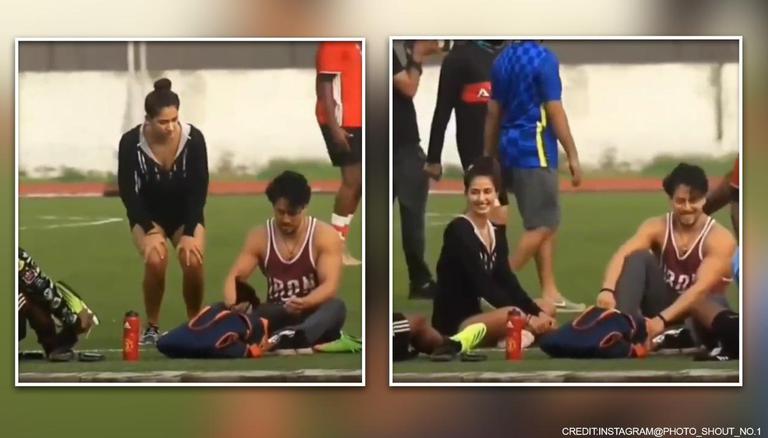 
Besides making public appearances at restaurants, coffee shops and production houses together, actors Tiger Shroff and Disha Patani were recently spotted playing football. Apart from the two stars, the football match also witnessed a bevy of stars together including Ranbir Kapoor, Arjun Kapoor, Ibrahim Ali Kha, Aparshakti Khurana, and more. In the viral videos and pictures, the rumoured couple can be seen walking around the field while talking and laughing.

A video from the practice match is going viral on social media where Tiger is seen warming up for the match, while Disha is also seen jogging. Another video showed Tiger warming along with other players while Disha is seen sitting beside him and being a part of the conversations. The Heropanti actor can be seen wearing a pair of shoes with a vest while Disha wore shorts and a jacket. Later, Disha Patani was seen waiting for Tiger while the actor played the match. Several fans of the two were excited to see them together playing the match while rooting for them. One of the users wrote, “ Tiger Disha looks so beautiful together.” Another user termed the two stars as ‘Tigsha.’ A third user wrote, “ Tiger Shroff is the real star there on the ground.” Another wrote, “Tiger is so good in football.”

Though the two stars have not yet made their relationship public, yet their PDA’s on social media is enough to leave the frenzy fans excited. . Talking about his son’s love life, veteran actor Jackie Shroff confirmed to Bollywood Bubble in a recent interaction that his son started dating at the age of 25. The senior actor also confessed that he was not aware of the fact of what they have decided for their future. Jackie also expressed his pride in the fact that Tiger is extremely ‘focused on his work.’

Last week, Disha was seen celebrating her birthday with Tiger and Krishna. The actor had shared glimpses of her celebration with the Shroff siblings on her Instagram Stories. Tiger also shared a video in which he was seen dancing with the birthday girl. Meanwhile, on the work front, front, Disha Patani was last seen in Salman Khan's Radhe: Your Most Wanted Bhai. She will next be seen in Ekta Kapoor’s Ek Villain Returns. Tiger Shroff, on the other hand, has Heropanti 2, Baaghi 4, Ganpath, and Rambo in the pipeline.