Eva Mendes recently revealed that she doesn’t rely on her partner Ryan Gosling to keep her social media feed updated. Read ahead to know more. 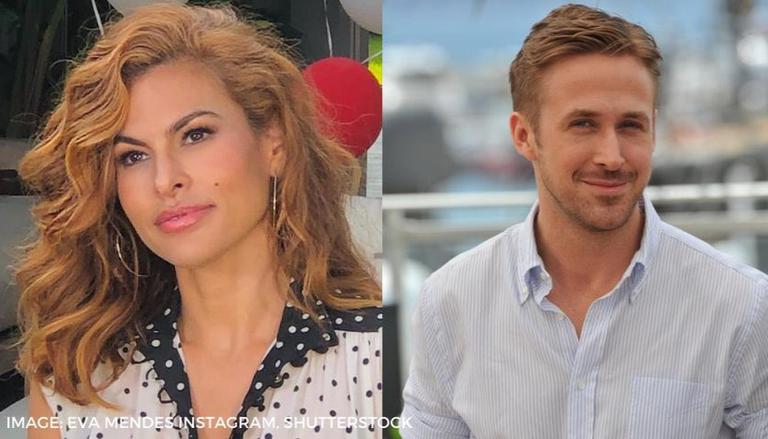 
Eva Mendes recently revealed that she doesn’t rely on her partner Ryan Gosling to keep her social media feed updated. The actor recently posted a picture of herself and one of the fans asked how many pictures of her have been clicked by Ryan. In response, the actor revealed that he doesn’t take any of her Instagram photos and it actually is a “girl thang.”

On June 28, 2021. Eva shared a picture of herself updating her fans on a look she wore the day before. In the picture, she can be seen leaning towards the wall while wearing a violet and white one-piece dress. She captioned her post by writing, “Lots of you asked who designed the dress I wore in yesterday’s post…It’s a female French designer, female founded business @chloestora. Women supporting women.”

While many complimented her, one fan wrote, “How many of your photos are taken by Ryan!!” to which Eva responded saying, “none that I post. My friends take them and I take theirs. It’s a girl thang :)” and on the same, another fan dropped a comment writing, “girl thang game strong.” Others dropped comments such as, “No one could wear it as beautiful as you,” “Beautiful colour,” “It looks beautiful on you.” Have a look at their reactions below. 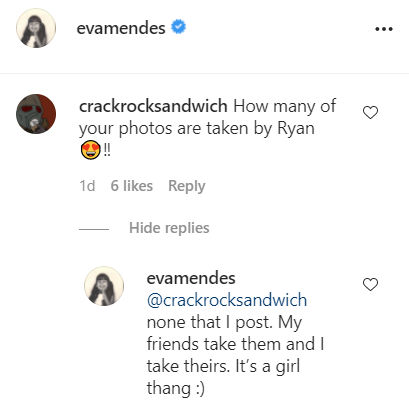 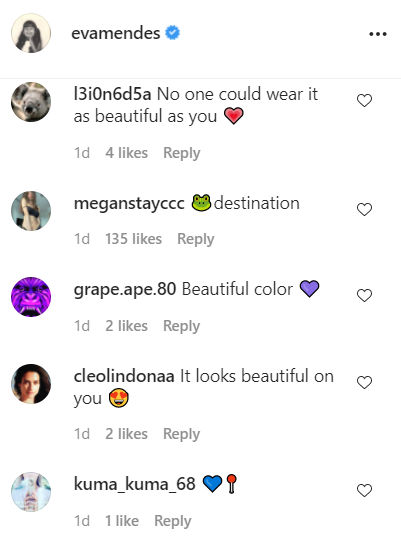 About Eva and Ryan's relationship

Eva and Ryan met on the sets of their film The Place Beyond the Pines and have been in a relationship since 2011. Recently, Eva shared a picture of their blossoming romance from the set of the movie and captioned her post by writing, “Throwing it wayyy back....” They share two daughters, Esmeralda Amada, 6, and Amada Lee, 5.

A look at Eva Mendes and Ryan Gosling's movies

Eva began her career with films such as Children of the Corn V: Fields of Terror and Urban Legends: Final Cut. She is known for appearing in movies like 2 Fast 2 Furious, Hitch, Ghost Rider, The Spirit and many more. On the other hand, Ryan began his career as a child actor on the Disney Channel's The Mickey Mouse Club and later appeared in films such as Murder by Numbers, The Slaughter Rule, The United States of Leland, The Notebook and many more.

READ | Eva Mendes' birthday: Did you know she featured in Aerosmith's song 'Hole in My Soul'?
READ | Eva Mendes raises her voice against spanking children; Netizens join the debate