Even Shahid Kapoor And Kiara Advani Are Pleasantly Surprised By ‘Kabir Singh’ Box Office Collections; Here Are Their Hilarious Posts

Mixed reviews and criticism for its ‘misogynist’ plot have not been able to dent the Shahid Kapoor-Kiara Advani-starrer ‘Kabir Singh’ at the box office. The lead actors themselves seemed to be pleasantly surprised as they shared quirky posts to share their feelings.

As ‘Kabir Singh’ earned a mammoth Rs 70.83 crore in just three days of the weekend, Shahid and Kiara had their own way to express their delight. While the former shared a selfie with Kiara and director Sandeep Reddy Vanga, where the actor is looking hilariously awestruck and surprised, the actress shared a boomerang video on Instagram stories of the lead pair goofily dancing around on ice. Both the moments were from the shooting schedule. 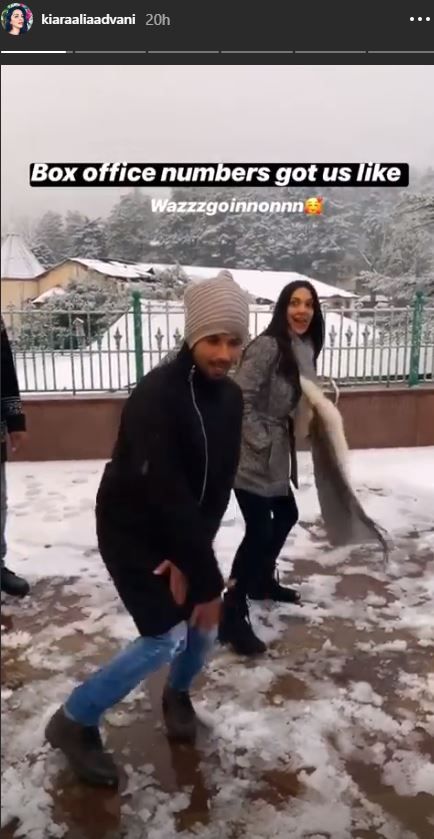 While their reactions were to the massive jump in collection on Sunday, Rs 27.91 crore, after Rs 20.21 crore and Rs 22.71 crore on the first two days, it’s the Monday figure that has really hit the ball out of the park.

The intense love story earned Rs 17.5 crore on the first working day of the week, which according to trade analyst Taran Adarsh, is something that even biggies don't collect. The total now stands at Rs 88.37 crore.

#KabirSingh is rewriting the rules of the game... Does remarkable biz on Day 4 [working day]... Will hit ₹ 💯 cr today [Day 5]... #KabirSingh is trending better than *all* biggies released this year: #Bharat, #Kesari, #TotalDhamaal and #GullyBoy... Amazing!

READ: Mumbai Based Doctor Demands Stay On 'Kabir Singh' For Tarnishing The Image Of Medical Professionals, Writes To Union Health Minister And Censor Board. Details Here

Thank you for the overwhelming love. #kabirsingh

Meanwhile, the movie also has been in the news for the portrayal of ‘toxic masculinity’ which was slammed by singer Sona Mohapatra and Central Board of Film Certification Board member Vani Tripathi. From ‘terribly misogynistic and extremely violent film’ to call it out for its ‘patriarchal narrative’, the celebrities didn’t mince any words while expressing their thoughts.