Exclusive: This Actor Just Admitted He Does Not Have A Crush On Priya Prakash Varrier

While the entire nation is crushing on internet’s latest sensation and Malayalam actor Priya Prakash Warrier, an actor just admitted that he does not have a crush on the viral ‘wink girl'

While the entire nation is crushing on internet’s latest sensation and Malayalam actor Priya Prakash Warrier, an actor just admitted that he does not have a crush on the viral ‘wink girl’.

In an exclusive interview with Republic TV’s Krishnakumar, actor Roshan Abdul Rahoof, who features in the viral song clip 'Manikya Malaraya Poovi' from 'Oru Adaar Love' along with Priya, confessed that he didn’t have a crush on her!

When asked if he has a crush on Priya just like the entire nation does, Roshan said, “She is my bestie. No, no.” 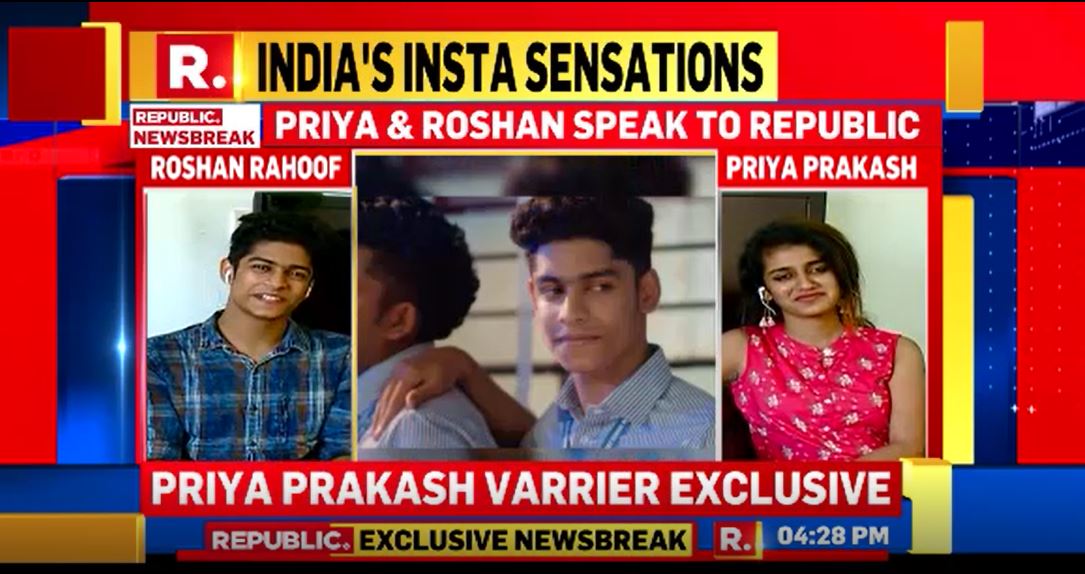 Republic TV also asked the 18-year-old viral sensation Priya Prakash Varrier about being termed as the ‘nation’s crush’. This is what she said:

“It’s very exciting. I’m feeling very good about it. A lot of people are crushing on me right now. It feels really nice.”

Priya, however, rued about the fact that Roshan didn’t have a crush on her.

“Though he (Roshan) doesn’t have a crush on me” said Priya.

Watch Roshan and Priya’s candid conversation with Republic TV in the video above.

Malayalam actor Priya Prakash Varrier has become internet’s new sensation ever since the song 'Manikya Malaraya Poovi' from her upcoming debut film 'Oru Adaar Love' released. A short video clip from the track, where Priya is seen raising her eyebrows and winking at a boy (played by Roshan Abdul Rahoof), went viral online.

Watch the viral clip below:

Thanks for the great response 😊

The Hyderabad Police on Wednesday registered a First Information Report (FIR) report under Section 295A (act intended to outrage religious feelings) against Omar Lulu, the director of ‘Oru Adaar Love’, after the song 'Manikya Malaraya Poovi' from his film allegedly hurt religious sentiments.

A group of Muslim youth filed a complaint at Falaknuma Police Station in Hyderabad against internet’s latest sensation and Malayalam actor Priya Prakash Varrier and the makers of the song 'Manikya Malaraya Poovi' from 'Oru Adaar Love'.

The complaint says the song 'Manikya Malaraya Poovi', when translated into English, allegedly insults the Prophet.

‘Oru Adaar Love’ is directed by Omar Lulu and is scheduled to release on March 3.