Farhan Akhtar Shoots For The Last Leg Of 'The Sky Is Pink', Before Kick-starting 'Toofan', See Pictures Here

Multitalented actor Farhan Akhtar kickstarted the shoot for the final schedule of his upcoming film 'The Sky is Pink'.

Multitalented actor Farhan Akhtar kickstarted the shoot for the final schedule of his upcoming film 'The Sky is Pink'. The actor announced it on his social media and shared the pictures of him starting with the last schedule of the film. The actor was vacationing with his lady love Shibani Dandekar and looks like he's back, all refreshed and charged up as he dived straight into work on being back to the city.

The actor took to his Instagram stories and posted a picture of himself with the caption, "Getting back into 'The Sky is Pink' frame of mind." He shared a second picture, where he can be seen at the gates of Mehboob Studio, with the caption, "#theskyispink #finalschedule #mumbaimornings."

Below are the pictures: 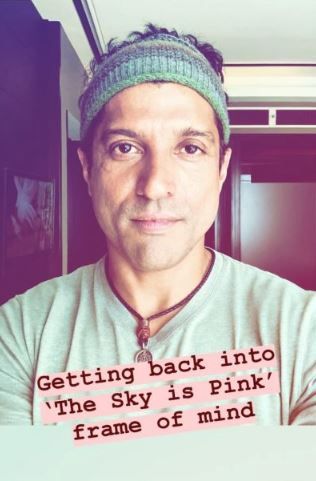 READ: Farhan Akhtar-Shibani Dandekar Are Having A Blast In Mexico, But It’s Their Cryptic Photo Caption That Has Got Netizens Trying To Decode It Farhan will be shooting in Mumbai and Andaman - the Nicobar Islands for the last schedule. It is a 2 weeks schedule and as soon as the actor wraps the final schedule of the film, he will start prepping for Rakeysh Omprakash Mehra's next 'Toofan.' The film will see Farhan essaying the role of a boxer.

The actor has already started prepping for the film and will reunite with Rakeysh Omprakash Mehra after six years, following the 2013 hit 'Bhaag Milkha Bhaag.' On the work front, Farhan Akhtar is currently basking in the glory of his recent production 'Gully Boy' and is also gearing up for his upcoming 'The Sky Is Pink' where the actor will be starring alongside Priyanka Chopra after 'Dil Dhadakne' and 'Toofan.'

On the personal front, the actor has been making headlines because of his relationship with TV host, Shibani Dandekar. The two recently took a vacation to Mexico, and from enjoying their ‘four feet from paradise’ to ‘going around the beach’, cartwheeling or making the ‘Shake Farout bin Protein’, the duo gave us not just couples goals but also travel goals.

READ: Here's What Shibani Dandekar Had To Say About Her Relationship With Farhan Akhtar, Read Here