From 'Sooryavanshi' To 'Eternals': Movies Releasing In Theatres This November

With the upcoming festival season right around the corner, here are some movies like 'Sooryavanshi', 'Eternals' and more releasing in theatres in November. 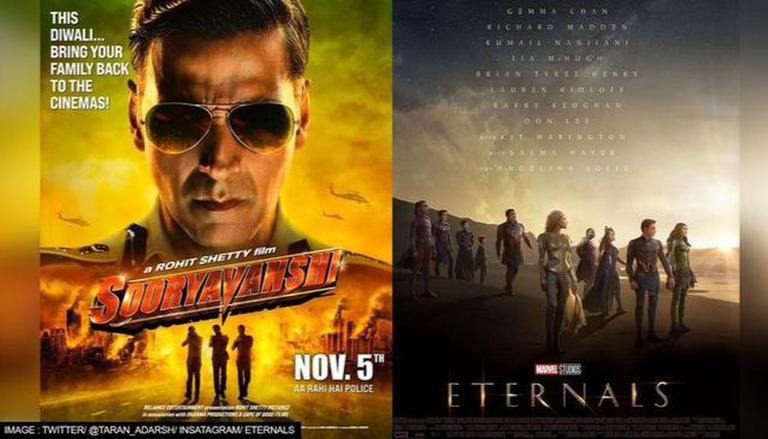 
With the movie theatres finally opening for the public in India, moviegoers are flocking the cinema halls to see their favourite artists on the big screen. Also with the upcoming festive season, studios and filmmakers are releasing some of their tent-pole movies. Here are upcoming movies releasing in theatres in November 2021.

Annaatthe is one of the most anticipated South Indian films of the year as its features superstar Rajinikanth in the lead role. Rajinikanth will be playing the role of Kaalaiyan, who is a village president devoted to his village folk and family, especially to his sister. The movie also stars Meena, Khushbu, Nayanthara, and Keerthy Suresh in lead roles and is all set to release in theatres on November 4, 2021, coinciding with Diwali.

Marvel Studios is all set to introduce ten new superheroes in MCU with its upcoming movie Eternals. The movie follows the story of the Eternals, an immortal alien race, who emerge from hiding after thousands of years to protect Earth from their evil counterparts, the Deviants. The movie features a star-studded cast of Gemma Chan, Richard Madden, Kumail Nanjiani, Lia McHugh, Brian Tyree Henry, Lauren Ridloff, Barry Keoghan, Don Lee, Harish Patel, Kit Harington, Salma Hayek, and Angelina Jolie. The movie will be released in theatres on November 5.

After a long delay, Rohit Shetty's fourth installment of  Cop Universe, Sooryavanshi is all set to release in the theatres. The movie features Akshay Kumar in the lead role opposite Katrina Kaif along with Jackie Shroff, Gulshan Grover, Abhimanyu Singh, Niharica Raizada, Vivan Bhatena, Sikandar Kher, Nikitin Dheer, and Jaaved Jaaferi in supporting roles.  Ajay Devgn and Ranveer Singh in extended cameo appearances reprise their roles of Singham and Simmba from the franchise's previous films. Sooryavanshi is scheduled to be theatrically released worldwide on 5 November 2021 coinciding with Diwali.

Kurup is an upcoming biographical-crime thriller film starring Dulquer Salmaan in the lead role. The movie is based on Kerala`s most eluding criminal Sukumara Kurup who has been on the run since the mid-1980s. The movie also stars  Indrajith Sukumaran, Tovino, Sunny Wayne, Shine Tom Chacko, Sobhita Dhulipala, and Maya Menon in the supporting roles and will release in theatres on November 12.

Bunty Aur Babli 2 is the sequel to the 2005 film Bunty Aur Babli and features the OG con-couple Bunty-Babli, played by Saif Ali Khan and Rani Mukerji battling it out with the new con-couple, Siddhant Chaturvedi and Sharvari Wagh. The movie is scheduled to have a theatrical release on 19 November 2021.

Ghostbusters: Afterlife is the fourth instalment of the cult classic franchise Ghostbusters and is set thirty years after the events of the original movie. The cast of the movie includes Carrie Coon, Finn Wolfhard, Mckenna Grace, and Paul Rudd in the lead roles, while Bill Murray, Dan Aykroyd, Ernie Hudson, Sigourney Weaver and Annie Potts reprise their roles from the original films. The movie is set to release in India along with the United States, that is on November 19, 2021.

Satyameva Jayate 2 is a spiritual sequel of the 2018 film Satyameva Jayate and stars John Abraham in a triple role alongside Divya Khosla Kumar, Rajeev Pillai and Anup Soni in important characters. The movie is scheduled to release on 25 November 2021.