Gajraj Rao took to his official Instagram handle earlier today and shared an elaborative review of the latest Netflix film Pagglait. Read more about it here.

Pagglait is a recently released Netflix film that revolves around the life of a young widow as she learns how to face the family after her husband's death. Pagglait's cast includes Sanya Malhotra in the lead and Shruti Sharma, Sayani Gupta, Ashutosh Rana, and Raghubir Yadav in pivotal characters. The film is being appreciated by the masses for its realistic take on the Indian middle-class family. Shubh Mangal Zyaada Savdhaan actor Gajraj Rao took to his official Instagram handle and posted a Pagglait review, which was loved by his followers, including the film's lead star Sanya Malhotra.

Badhaai Ho star Gajraj Rao recently watched the new Netflix film Pagglait and posted his take on the dark comedy-drama film written and directed by Umesh Bist. He shared a poster of the film on Instagram and wrote, "Pagglait is a CT scan of the great Indian middle class - deep-rooted relationships, elaborate facades, and how a grieving young widow somehow manages to end up at the center of this drama. Fantastic performances by the ensemble of talented actors. But the real revelation is Sanya Malhotra in her career-best performance, holding the film together with grace and sincerity. Congratulations to the writer and director Umesh Bist and all the departments for a great job, especially the cinematography by Rafey Mahmood and the surprise package in the music by Arijit Singh with lyrics by the ever-dependable Neelesh Misra. Last but not the least, congratulations to Guneet Monga and Sikhya for an absolute winner of a film!"

Gajraj Rao has around 117k followers on the social networking site and his review about the latest Netflix film Pagglait garnered close to 6k likes within a day of posting it. Fans and followers of the Badhaai Ho star praised him for his elaborative review as well. Lead actor of Pagglait, Sanya Malhotra also expressed her gratitude and wrote, "Sir Bahot bahot shukriya â¤ï¸
I’m so glad to see this ðŸ¥°♥ï¸". 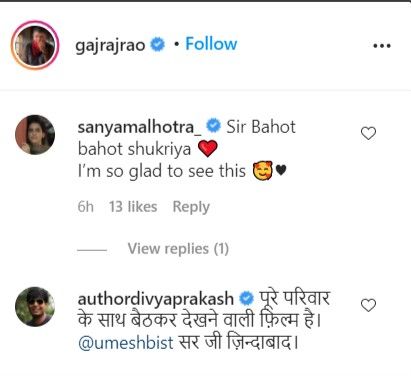 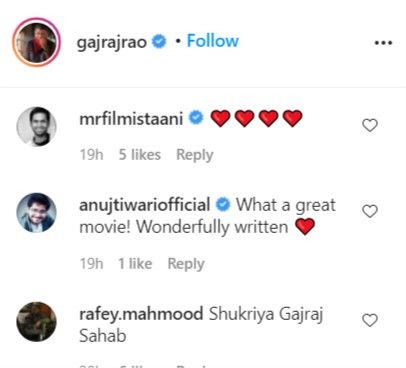