Mira shared two images — one from Shahid's debut film 'Ishq Vishk' and the other from his current film 'Kabir Singh'. Shahid Kapoor's brother Ishaan Khattar dropped a comment saying 'Game Khallas', while the other fans said that there is no change in him except the beard. 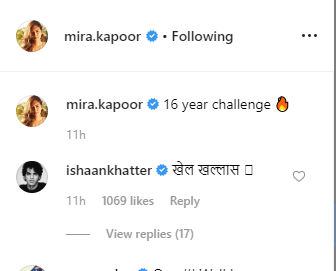 Meanwhile, fans were treated with a new song from Shahid Kapoor-starrer 'Kabir Singh' on Thursday. The makers released 'Kaise Hua' from the film, featuring an engaging journey of love between the lead pair.

The song traces the journey of how Kabir and Preeti fell in love. It features the actor adding a pillion to his bike for his love.

The soulful melody gives an insight into the lives of the lead pair as they both set out to spend time together until they get smitten with each other.

Other than 'Kaise Hua', makers have also dropped 'Mere Sohneya', 'Tujhe Kitna Chahne Lage', and 'Bekhayali' from the forthcoming film.

The film comes as the Hindi remake of Telugu hit 'Arjun Reddy'. While the 'Padmaavat' star plays the lead character in the film, Kiara Advani, who was recently seen in Netflix's 'Lust Stories,' essays the role of 'Preeti'.

The film is directed by Sandeep Reddy Vanga and produced by Bhushan Kumar, Murad Khetani, Krishan Kumar and Ashwin Varde. It will hit the big screens on June 21.